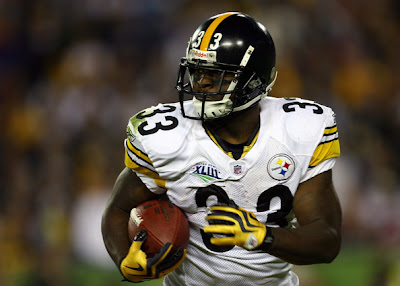 What a roller coaster of a ride former Steez RB Gary Russel has had the past couple months. He started the year off with a bang and rolled through the playoffs and the first TD of Super Bowl XLIII, which I remind you would put him in front of Walter Payton on the all-time Super Bowl TD list. He then had a very brief stint with the Bungals who released him almost as soon as they signed him and now he has signed with the Oakland Raiders. What a crazy turn of events that was. Going from Super Bowl champ to being employed by Al Davis and the circus/joke of a organization via a quick stop at the Ohio penitentiary aka the Bengals. What do you think actually happened that he declined this quickly?
Posted by Alex at 12:05 PM