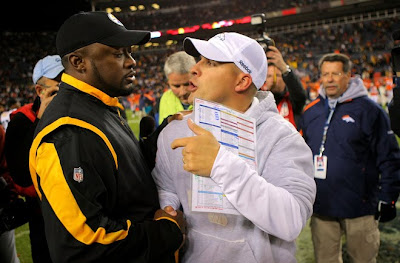 Since this picture is exceedingly awesome, we decided to let you, our readers (all 17 of you, but we greatly appreciate each and everyone of you) decide what the caption should say. Please submit your caption suggestion via the comments to this post. We will determine which one we think is most fitting. The winner will have a post devoted specifically to their caption, will receive a congratulatory email from the most enigmatic Steezbro, Alex, and maybe a signed picture of the Steezbros, depending on the greatness of the caption. Get your submissions in by Sunday so we can pick a winner by early next week. Make sure to leave your name with your submission. 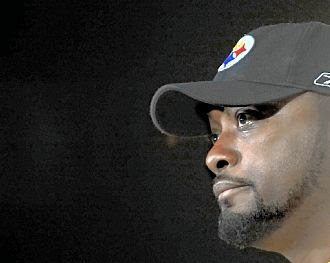 Tomlin takes it all in. I don't think I have seen a more intense set of eyes on anybody. 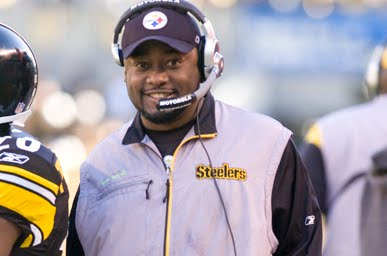 Tomlin, always happy to give an interview, answered a bunch of questions for Steelers.com yesterday. Here is an excerpt. Click the link to read the entire interview.

Throughout the 2009 NFL season, Coach Mike Tomlin will provide his insight and observations to Steelers.com on a variety of topics pertaining to the team and the National Football League.
Q. The Adrian Peterson hit on William Gay has been getting a lot of air time. Is that something you have to address with a young player so that it doesn’t linger?
A. That’s one of the beautiful things about the National Football League. It’s a humbling league. Every now and then you are going to lose physical confrontations, and I don’t care who you are. That one is getting some air time because it was in open grass the moment that it occurred. Who it was – Adrian Peterson – makes it a big story, but over time it’ll pass when somebody else gets caught in a compromising position either this weekend or next weekend, and then it’ll be old news. William Gay is a competitor, and he understands that. We live by the motto: every now and again gun fighters get shot. He got shot in that instance. 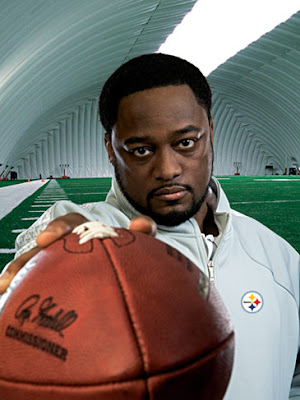 "Rashard, I am giving you the ball for the rest of the season. Don't let me down, Delicious, and for my and all of Steeler Nation's sake, hold onto the ball!" 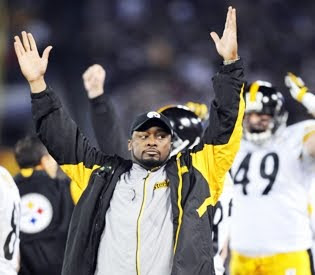 Tomlin knew it was a touchdown as soon as Tyrone Carter touched the ball. Our team is great because we are solid from 1-53. The Denver game proved it. Great job Keyron Fox, Ty Carter, Nick Eason and Ziggy Hood.
Posted by Elliot at 11:42 AM

Josh M: "Please let go of my hand. You're hurting me."

Coach T: "I will crush you"

Tomlin: "You're much shorter in person"