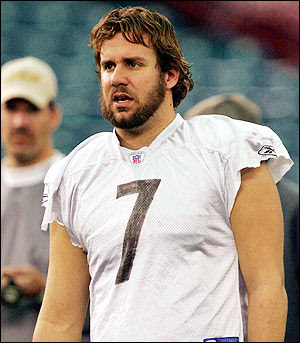 According to multiple websites, a Civil Complaint, not criminal charges, has been filed in Nevada against Ben Roethlisberger for sexual assault among other claims. Check out Mondesi's House for a more in depth look at the situation and for more links. Also, ProFootballTalk has a few pieces about the situation where they take a close look at the actual complaint that was filed in Nevada.

Here is another interesting link to a TMZ article regarding Big Ben's accuser.

For most Pittsburgh fans, Ben's partying antics are well established as is his love for the ladies. Many pictures have surfaced on the net through the years of Ben with various women at bars as well as the multitude of rumors that fly around the Pittsburgh bar scene.

I love Ben the football player, but Ben the person is a totally different story. To me, personality wise, he comes across as a dbag. He is cocky and seems to think he is above everyone else. He thinks he can score any chick out there and that is is a privilege for them to hook up with him. But do these stories make him a sexual predator? As always we will have to wait until all the facts come out and this plays its way through the legal system. Interestingly, no criminal charges have been filed as of yet. Also suspicious is that, the suit was not filed for almost 9 months after the incident occurred. And check out the TMZ article above regarding the mental state of his accuser.

Roger Goodell will most certainly look at the situation to determine whether it warrants a suspension for Big Ben. Unfotunately for Steeler fans, Goodell does not need a criminal conviction to impose discipline. I think everyone needs to take a wait and see approach in this case, ever mindful of the Duke Lacrosse case where everyone jumped to conclusions that were erroneous and people's lives were adversely affected. If this women's claims are true, I feel for her and she deserves whatever damages she is awarded. However, the main remedy in a civil suit is a money award and that could be motivation enough to file a frivolous suit against someone with the resources of a Superbowl winning QB with the hope of a settlement. But like I said, let's wait and see.
Posted by Elliot at 1:13 PM