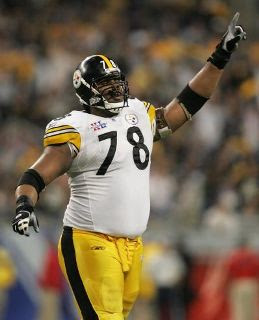 The Steelers announced that Max Starks signed a four-year deal today. The initial report did not include the value of the contract, but John Clayton at ESPN.com is reporting that it is for $26.3 million over four years. The team can now revoke the franchise tag from Starks that would have paid him $8.5 million in 2009.

The new contract provided both sides with something it strongly desired. For Starks, it was long-term security. For the Steelers, it was cap relief. As a result of the signing, Pittsburgh cleared about $3 million from its salary cap - money that will likely be used to sign one of the many pending free agents. Dale Lolley, a sports reporter covering the Steelers, speculates that the front office is targeting Heath Miller as the next player to receive an extension.
I have mixed feelings about the signing.
THE BAD
It's rare for Kevin Colbert and our beloved front office to place themselves in a bad spot financially with a non-superstar player. But that's exactly what they did with Max Starks. After Starks lost his starting job to Willie Colon in 2007, rumors were flying that Starks and Tomlin didn't get along. What other explanation was there for losing the starting right tackle job - after winning a Super Bowl no less- to Willie Colon? With the coaching staff's preference for Colon, it seemed likely Starks would leave in free agency or sign a small contract worthy of a back up. Inexplicably, without any reports of demand for Starks (since this blogger is privy to that sort of information), Kevin Colbert chose to apply the infrequently used transition tag, which guaranteed Starks $7 million for 2008. At $7 million, Starks was the second highest paid player on the team behind Ben Roethlisberger. Tomlin had little input on this signing because, despite the front office's belief that was worth a big contract, Starks started the 2008 season as a back up. A $7 million back up.
In hindsight, the signing of Starks was huge for the Steelers. Marvel Smith was injured early in the season and Starks played admirably at left tackle for the rest of the regular season and playoffs. The offensive line struggled as a whole, Starks included, but his play at left tackle helped us to win a Super Bowl. Nonetheless, the offensive line was still the biggest weakness of the team. Some in the media called it the worst line to ever win a Super Bowl. And I've been hardpressed to find a single scout that ranks any of the Steeler lineman among the top half of the league. In my opinion, Starks was the best offensive lineman on the team, which isn't saying much, but he is nowhere near one of the best in the league.
After this past season, Starks was once again a free agent. The Steelers had three free agents on the offensive line, Starks, Kemo, and Colon. To maintain a semblance of continuity on the line, the team needed to keep several of these lineman. Starks was top priority. But instead of aggressively pursuing a contract before free agency, the Steelers slapped the franchise tag on him, guaranteeing that he would be paid like a top five left tackle. Now I wanted to keep Starks, but guaranteeing him $8.5 million when the team was already tight with cap space didn't seem smart to me.
However, the new contract lessens the cap hit to less than $7 million per year. It's much better than $8.5 million in 2009, but still a lot to pay for an average left tackle. The Steelers now have more than $11 million tied up on the left side of an offensive line that was one of the worst in the league. Color me less than excited.

THE GOOD
Considering the position they were in, the front office did a terrific job negotiating a contract extension. Max Starks had most of the leverage in this game, because at worst he could play 2009 for $8.5 million. The Steelers knew they would have to pay more than the $8.5 million in guaranteed money, and provide a lucrative salary, or Starks could walk. The deal, which offers only $10 million in guarantees and decreased his salary to less than $7 million per year, was even better than I thought possible. The team now has cap space to go after other important players. $7 million per year is still a lot for an average player, but the salary cap keeps increasing, and as a result, so do player salaries, expecially at the coveted left tackle position.
The good news not related to cap space is that the Steelers have the left tackle position set for the next four years. Even though Starks wasn't incredible at left tackle in 2008, he is a relatively new starter at the position. He has less than two seasons practicing there and has the tools and size needed to develop into a good player that can protect Big Ben's backside. It also provides the Steelers with some continuity on the O-line going into 2009. Continuity is one of the most important factors in offensive line play. I still think the O-line needs to get better players on the interior and right side of the line, but all of the signings this year will enable the team to transition (add Kraig Urbik and Shipley if they develop nicely) without making wholesale changes.
OVERALL
Given the position of the front office, they did an incredible job getting a contract in place early in the offseason. The extension provides long-term stability at the left tackle position, and it provides the team with cap room that was desperately needed. I wasn't thrilled with how the team handled the contracts for Max Starks in the past, but this was the best for which the Steelers could have hoped.
Posted by Josh at 7:42 PM