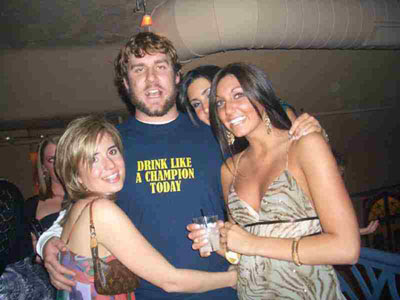 For the caption contest on this one, leave your best theory on what you think happened inside the bar bathroom in Georgia.

The second big news of the past couple days involves the leader of this team, Ben Roethlisberger. With another sexual misconduct case still pending, another woman, this time a 20 year old college student (she has dropped out of college since the incident), has accused Ben of sexual assault. Unlike in the first instance, the woman went immediately to the police and to the hospital. Ben has once again, through his attorney (the same one who represented Ray Lewis when he was charged with murder), denied the allegations and professed his innocence. Ben is cooperating fully with the police's ongoing investigation. The police and DA should reach a determination by Friday or early next week whether they will charge Ben with a crime.

In the post I penned when the civil suit was filed against him back in July, I wrote about Ben's irresponsibility towards partying and women writing that I thought that he was a dbag personality wise because he thinks he is God's gift to women. He believes that it is a privilege to sleep with him. Any girl that thinks otherwise is crazy. We continue to get evidence that what I wrote was and still is true. Whether he is ultimately charged with a crime, where there is smoke, there is fire. There is one thing I know he is guilty of for sure and that is poor judgment.

Take a look at the above picture. It was taken around his rookie season. I can understand going out and partying when you are 23 years old, the QB of the Steelers and a recent millionaire. I cannot understand continuing this behavior once you are the established leader of a two time Superbowl Champion, 28 years old and you are still in the midst of a prior sexual misconduct suit. Why put yourself in the situation? You have to know you are a target for this kind of stuff. Why risk it with a $100 million contract on the line.

The fact that he is still exhibiting the same behavior as five years and as five months ago leads me to question his judgment greatly. Is this really who we want as the face of our franchise? Should we turn into Bengals fans and look the other way while our players behave like animals for the sake of winning some football games? Do you think that Tom Brady, Peyton Manning or Drew Brees would ever place themselves in the circumstances that Ben continually places himself in? I don't. You know where Peyton is right now? Watching film, trying to win games next year or making another commercial.

His case is not going to be a he said, she said case like the first one. When the girl went to the hospital, they did a bunch of medical tests on her called a rape kit. The results of which are fairly reliable in determining whether a sexual assault occurred. There also are alot of witnesses. How reliable they are remains to be seen. Anyway you look at it, we should know soon whether charges will be brought against Ben. Anyway you look at it, the situation is not ideal. Beyond being repulsive behavior from our QB, it has major implications going forward for our team and for Ben.

I would be shocked if Ben isn't called in for a sitdown with Roger Goodell at some point in the near future. I am not sure if it will be made public or not, but it will happen. Goodell can suspend Ben without criminal charges being filed and without a conviction if they are filed. Goodell has usually waited for cases to make their way through the legal system before he takes any action. The team has I'm sure starting making contingency plans if Ben can't play this season. The Rooneys are a conservative bunch. They are definitely asking themselves whether they want Ben as the face of their franchise. He should have learned from his past run-in and didn't. What does that say about him? Is football more important to him or are the spoils of being a football player what matters most? It is pretty obvious to me.

For the team's future, I think we would be ok with Batch for next year. Just OK. Not a Superbowl contender. Maybe Dennis Dixon beats out Batch but Dixon is still a work in progress. Or we could sign a free agent QB. I don't even know anyone worthwhile to bring in. Derek Anderson just got released but who the hell wants him? Not even the Browns. We could draft someone this year as an eventual replacement. I have heard Tim Tebow thrown around. He is a project but he is also a proven winner. Colt McCoy's name has surfaced as a possibility in the second round. The problem is, this team is ready to win now. Those QB's are not. We need Ben to pull it all together. But first he needs to pull his life together and figure out where his priorities lie. I hope he does it sooner rather than later. I really hope that he does not have to do it from a jail cell. If he did what he is accused of, he deserves jail and he will never wear the black and gold again. Even if he is found innocent, I still think he is a dbag and I will remain skeptical of him until he exhibits some sound judgment. I may be waiting awhile.

Leave your thoughts in the comments. What are your theories?
Posted by Elliot at 11:45 PM

Forget the fact that he's 28, a two-time SB winning QB, a $100mil man, and the face of a franchise; the mere fact alone that he's got a pending civil suit from a similar situation should keep him at his best behavior and away from clubs and "club" chicks as much as possible. There's nothing there but trouble. This is extrodinary poor, poor judgement. Even if he's never charged with a crime from all of this, his image will be tarnished and I think it will be hard to root for him. Of course I'll root for the team but I'll see Ben in a different light forever (even though we've all known he's a meathead). Worst of all; how will parents explain to their kids what's happening top their favorite player or why they can't get the new No. 7 jersey for Xmas. Sad.

If he is convicted of a crime of this nature, I'd like to see him banned from the league forever. His days of playing in the NFL should over as that behavior should not and will not be condoned ANYWHERE. Regardless, there could be league sanctions (suspensions, fines) against him, his head certaintly will not be in the right place, and almost everyone has lost respect for him. All of this could have a detrimental effect on his play next year (if he even plays) and in the years to come.

Personally, I don't think Ben forced her to do anything. He and his buddies might have been messing around with her and laughing at her stumble around and what not. But I never think he forced her into sexual contact. At worst, he might have smacked her ass after she fell in the bathroom and ralphed. But... this my opinion and the truth remains to be seen. Whatever the case, this is not even close to the types of situations you want your franchise QB in.

Whats next for the steez. Luckily the have time on their side and they can see how this plays out before the draft. I'm sure they've made calls to Derek Anderson's agent and may possibly be bringing him in for an interview. He might not be great, but he had a few good years with the Browns and he's still got a live arm. IF Ben is charged, I believe you will see the Steez draft a QB. It could one of a few ways and will obviously depend on how the draft is playing out at the time. They could draft Dan LeFevor in the 3rd or 4th or hope Colt McCoy is available in the 2nd. Personally (and I know most of you think I'm crazy) I think this sets up perfectly to draft Tebow. I believe we could trade down or out of the 1st and still get him. What better way to restore the Steeler image. I know he's a work in progress, but he's always excelled at just that - WORK. He's a leader, a winner, and has all the intangibles. He'll work his ass off to achieve anything he wants. So what if he can't make all the throws right now. He'll work and work at it until he gets it. In the meantime the steez can get back to playing D and running the ball, just like when Ben first started playing. And you can bet your ass he won't have ANY of the off-field problems that Ben's had. I say... Let the Tebow era begin!!!