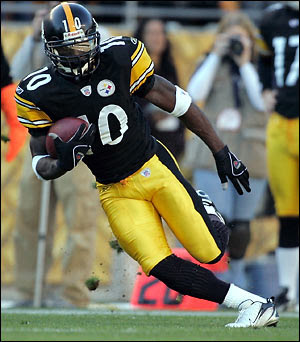 Santonio Holmes Traded to the New York Jets for a Fifth Round Pick
The crazy offseason continues. Multiple sources are confirming that the Steelers have traded the Super Bowl MVP to the Jets. A lawsuit was recently filed claiming Santonio threw a drink at a woman in a bar. Apparently the Steelers had enough of Santonio's off the field exploits (this is at least the third off the field incident since he was drafted).
I'm shocked by the news. Rumors have been circulating that the Steelers would not re-sign Holmes at the end of the 2010 season when his contract expires, but I fully expected him to be on the team in the coming year.
The compensation doesn't seem to be nearly enough for a receiver that eclipsed 1,200 yards last season. Perhaps the Steelers know more than we do. Profootball talk recently reported that Holmes will receive a four game suspension
Let the Dez Bryant rumors begin.
Posted by Josh at 11:51 PM