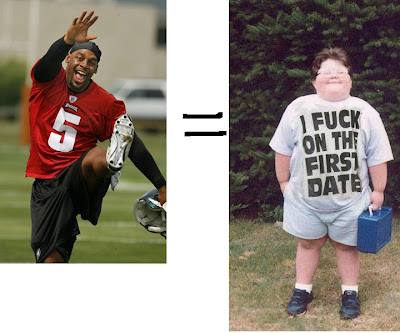 It's official. I always knew it but McNabb is retarded. Not only was he dumb enough to not know the rules of the league but he was also stupid enough to tell the media he had no clue and then made the comment of "... I would love to see what happens in the Super Bowl or the post season." Really? No, honestly? Wow. This shows what the state of the Eagles is. Fat Bastard should have his players completely prepared for every situation and clearly he doesn't. But then he doesn't know his kids are heroin addicts either. This obviously would affect the way McNabb played in the extra period and maybe the Eagles would have gotten a much needed victory if he knew the rules. The sad part is that he was in the league for the last tie. If I were in the Eagles upper management I would be very upset that I am paying someone millions of dollars to control my team that doesn't even know the rules of the game. Pitiful.
Posted by Alex at 12:38 AM

I guess he thinks they give out two Lombardi tropheys if the Super Bowl is a tie.