Peter King: Give the ball to Gary Russell 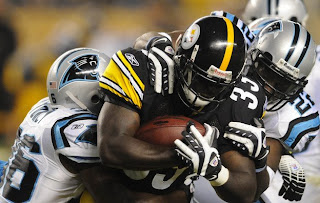 Peter King, at CNNSI.com is demanding that Gary Russell gets the damn ball. In his Monday Morning QB column, King mentioned Russell, the current short-yardage back, twice. Here is what he wrote:

5. Pittsburgh (8-3). The only thing that can stop this team is its running game. Or lack thereof. If I'm Mike Tomlin, I'm giving Gary Russell some important carries Sunday in Foxboro. What a month the Steelers have coming up: at Patriots, home vs. Cowboys, at Ravens and Titans. They'll never make it with the kind of running game we saw Thursday night.
I think this is what I didn't like about Week 12:
a. Willie Parker looks like he's running scared. He ran tentatively against those mighty Bengals, tiptoed into holes and actually shied away from a big hit against Rashad Jeanty. A worrisome display for the Steelers, who should be playing feisty backup Gary Russell. Parker's dancing first-half runs Thursday night: 1, 0, 1, 4, minus-2, 1, 0, 6, 3, 1, minus-1. He's obviously favoring his bum shoulder and hamstring.

With Parker's injuries, I can't say that I disagree with King, but I think the offense should have some sort of rotation between Parker, Moore, and Russell. If Willie is healthy, he should get the bulk of the carries. But, if he continues to dance into the holes, Moore and Russell are capable of being productive players. I'd like to see Russell in some I-formation looks with McHugh as full back (not happening in an Arians offense) and Mewelde Moore in the spread looks. Let's just give Willie a light load until he heals.