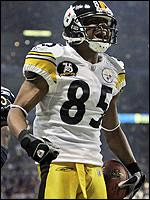 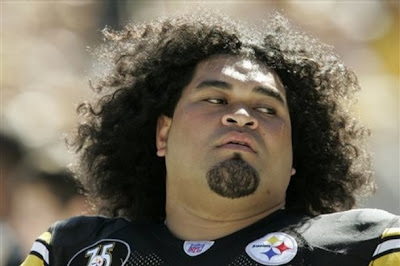 Nate Washington-Peace
Most recently, Nate Washington signed with the Tennessee Titans yesterday. The contract was for 6 years and $27 million with $9 million guaranteed. Seems a little steep for a third receiver. It was never realistic for the Steelers to keep him especially at this price. Nate does have explosive speed. He also has the tendency to drop alot of balls. His likely replacement will be Limas Sweed who will replace the dropped balls adequately. (See AFC Championship Game). Many receivers make big jumps in terms of productivity in their second year. Let's hope this is true for Limas. I really want to break out my Limas Jersey. In an interview with Bruce Arians regarding the departure of Nate, he also mentions someone by the name of Martin Nance as a possible replacement. I have never heard of this Nance character. Apparently he has been on the practice squad. One practice squader not mentioned was Dallas Baker. Arians also mentions drafting a receiver as a replacement for Nate.

Chris K-Is Back, Needs to Step it Up
On the offensive line, Chris K. will be coming back to the Steelers to anchor the left guard spot. He signed a $20 million deal over 5 years. For a few moments, it had looked as if the Jets may steal him away from us but he used his better judgment and returned to the Steez. This means that for better or worse, we will have the same starting line next year as we had for most of the season and the playoffs. Starks at LT, Kemo at LG, Hartwig at Center, Stapleton at RG and Colon at RT. If Kemo would have left, we would have most likely been looking at Trai Essex starting in his place and pretty thin at back ups for the guard spot. Now, the Steelers need to decide whether to bring back Essex, which I think they will. If they don't bring back Essex, it is surefire sign that they plan on drafting a decent amount of Hogs in April.

Even though the Steelers won the big game with this line, you can't have your $100 million QB getting sacked over 45 times and hit countless more times. You can take it to the bank that the Steeler brain trust will be drafting O-lineman early and often in this years draft. Something can be said for continuity of play for an O-line. But I think there should be competition for some positions this year. I think Starks and Hartwig and most likely Kemo are safe but if we draft a rookie guard or two you never know. I would love to see Tony Hills get a real shot at right tackle with Colon moving to what some think is his natural position of guard (let's hope it is his natural position because he stinks at tackle) and competing with Stapleton and maybe a draft pick.

Bryant McFadden-Still on the Market, Steez Still Have Shot
The initial frenzy of free agency has come and gone. McFeezy is still out there. He met with, you guessed it, the AZ Cardinals yesterday but so far, nothing has been announced. Word is the Steelers are still interested but can't afford anything close to what some CB's have been getting so far. I really would love to see him come back. He has been solid against the run and the pass. He is aggressive and a hard hitter. If we lock him up, we have a very solid secondary again next season. That being said, I believe the Steelers brass is very high on Big Play Willie Gay and so am I. He filled in more than admirably for Bryant when he was hurt this season and received alot of playing time throughout the year. Another reason I want McFadden to return is, I don't want us to have to draft a CB high. Yes, maybe we could get someone better who would also give us much needed kick/punt return ability. However, McFadden fits great within our system. A rookie is a rookie and has to be developed. It is also a draft pick that we can't use for some other position we need. O-line, D-line, Safety (Clark and Ty Carter are free agents next season along with a lot of other guys-we can't keep them all), LB-Foote and Farrior will soon be departing, WR, TE-Heath may be gone next season. I say save the pick, save the energy to develop someone and sign McFeezy. As more and more days pass, it seems we could get him for less than we originally thought it was going to take. Kevin Colbert, get on it.
Posted by Elliot at 3:28 PM

You're such big Steeler fans and you never heard of Martin Nance? Big receiver, doesn't have Nate's speed. Played with Ben in college. Instant chemistry.

I read up on him after I saw him mentioned in the Arians article but I had never heard of him previously.