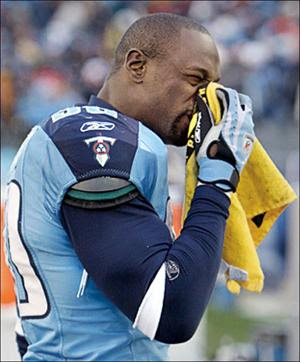 The Post Gazette is reporting that the Steez will kickoff the 2009 NFL season with the Tennesee Titans on September 10th. This will welcome back Nate Washington and Chris Hope to Heinz Field along with the last team to beat the reigning Super Bowl Champions. Speculators were predicting the opener would be against the Titans or Ravens. Tired of being beaten in prime time, the Ravens asked the NFL to be spared the embarrassment of playing the Steelers in front of a national audience.

Let's not forget that the Titans were also the last team to fall victim to the Terrible Towel Curse after LenDale "I'm a lard-ass" White and Keith Bullock stomped and wiped their nose with our beloved towel. Karma is a bitch and they got theirs and all's well that end's well. Hopefully, the Steez will return an asswhooping to kickoff the repeat.
Posted by Alex at 3:42 PM