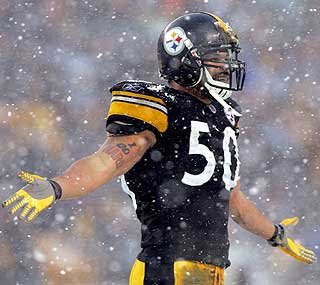 Two items of interest not related to the draft.
1. Rumor has it that the Steelers will cut Larry Foote. PFT is reporting that Foote has already been cut to save $2.8 million in cap room. PFT has reported false information before, so I'm waiting to hear more from a reliable source. (UPDATE: The Report is true.) The Steelers don't have much cap room and Timmons could take over Foote's starting position, so this news isn't all that surprising. However, the timing is a little odd. If the team wanted to cut Foote, it probably would have done it earlier in the offseason. Maybe it was hoping to make a trade involving the linebacker during the draft? I'd love to keep Foote on the team for his final year. He has been a solid player that has helped the team win two Super Bowls, and he still plays the run much better than Timmons. If nothing else, it helps to have a veteran presence to continue the tutoring of young linebackers like Timmons and Woodley. That said, Foote is hardly irreplaceable and may free up enough cap room for this next point. If this is the end, Larry, Steeler Nation thanks you!
2. The Steelers search for a number 3 wide receiver continues. By all account, Limas Sweed is doing everything right this offseason and I hope he makes a huge jump in his second year, but it sure would be nice to grab a veteran or two. We're one injury away from Limas Sweed starting and Mike Wallace/Dallas Baker/Martin Nance in the number three spot. So it was good to hear that the Steelers hosted Ashley Lelie. Lelie's career has been a disappointment after a fast start in Denver, but he won't be asked to be more than a role player in Pittsburgh. He's an extremely fast player that has averaged more than 17 yards per catch in his career and could try to fill the Nate Washington role. After playing for the Raiders, he'd probably sign a cheap deal to join the defending world champs. Then again, I seem to remember Lelie as a less than stellar teammate. Even if Lelie isn't the answer, it's welcome news that the Steelers recognize the need for another veteran receiver.
Posted by Josh at 12:26 PM