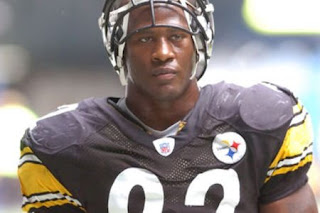 It was a busy weekend for the Steelers. The team finished a relatively peaceful negotiation with James Harrison, the Defensive Player of the Year. The Post Gazette is reporting the deal at 6 years, $52 million, with $20 million in guarantees. As more details become available, we can dive into the salary cap ramifications of this deal and its impact on signing the bonanza of players that will become free agents after 2009.

Looks like we can enjoy the tandem of Silverback and Woodley for years to come.
In other news, Byron Leftwich signed with the Tampa Bay Bucs. He'll likely have a good shot at winning the starting job in Tampa, which is probably more enticing than serving in the back up role in Pittsburgh. Good luck Byron. Charlie Batch now returns to his role as fan favorite.
Posted by Josh at 11:35 AM