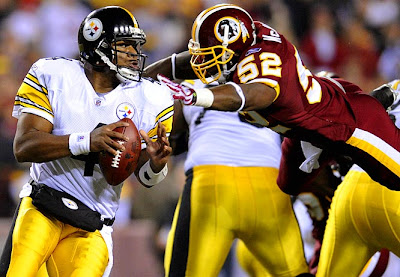 According to the Pittsburgh Post-Gazette, the Steelers have finally offered Leftwich a contact. The Steelers have been giving much lip service to the fact that they wanted to bring both Leftwich and Charlie Batch back for next season, but neither had been offered a contract or were even in serious discussion for one until today. The contract is for two years at near the league minumums for veterans with Byron's level of service.

Leftwich has recently met with the Redskins and Bucs so it is not surprising that the Steelers finally made a move. What is surprising is the lack of interest in Leftwich this offseason especially how he performed when givin the opportunity. The level of quarterbacking in the NFL after the top 10 is not especially great. I could think of more than a few teams that would be better off with Letwich calling the signals than who they currently have under center.

This man got a 3 year, $9 million deal after this ridiculous display:


I find it hard to believe that teams like Minnesota, who are maybe one QB away from a Superbowl caliber team didn't take a serious look at Leftwich. I would love to see him as our backup again, don't get me wrong, but sometimes I just don't get this league.

Teams that should have looked at him:

Yet not one team had shown interest until this past week. This is why we win superbowls.
Posted by Elliot at 9:28 AM