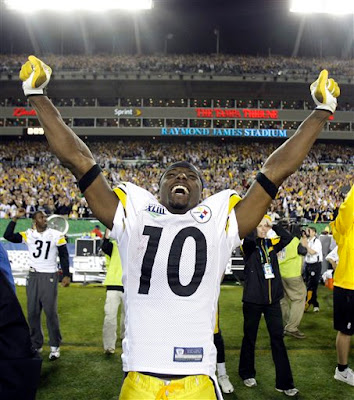 Per PFT, the drug charge against Santonio has been thrown out because the arresting officer did not have probable cause to pull over Santonio's vehicle. Thankfully, this means that he most likely will not be suspended by the league next season. He already was suspended for one game by the Steelers which he served last season. There is an outside chance the league could impose some sort of penalty, financial or otherwise, due to the fact that a small amount of pot was found in his vehicle. Under the league's personal conduct policy, there is no requirement for a conviction to impose discipline on a player for conduct that violates the policy.
Posted by Elliot at 2:44 PM