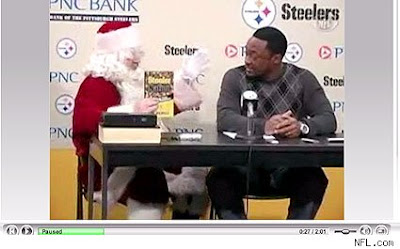 Merry Christmas and Happy Holidays to everyone from the Steezbros! Let's hope the Steez can bring us home a Festivus Miracle. I'm pretty sure I know what Tomlin is requesting from Santa. In lieu of doing the usual 5 pics for Tomlin Thursday, Jenn wrote an epic poem. It is so awesome that I don't want to take anything away from it with pictures. Here it is in all its glory. Enjoy! A safe and happy holiday to you all.

Twas two nights post-Christmas, and all through Heinz Field,
The Steez offense ran plays to which the Ravens' D would yield.
The screens were thrown by Ben with great care,
while the O-Line ensured that Terrell Suggs wouldn't get there.
The fans were jumping way out of their seats,
Still picturing the playoffs, what an ambitious feat.
And Tomlin with his headset, LaBeau in his cap,
called defensive plays that kept close all gaps.
When way down the field there rose such a clatter,
As Woodley grabbed a fumble; now to make it matter!
Down to the Red Zone, Ben threw in a flash,
and Santonio caught it, past the first down hash.
The Offense went no-huddle,so lively and quick.
Since the D got the ball back, thanks to St. Dick.
More rapid than the Ravens, the Steelers, they came.
Tomlin whistled and shouted and called them by name.
"Now Big Ben! Now Wallace, Now Miller, Now Hines!
Now Mendenhall, and Santonio, break through their lines!
To the back of the end zone! Ben, hand off the ball!
Now dash away, dash away, Mendenhall!"
The ball he carried, safe in his hands,
while fans erupted from all the stands.
He broke through the plane, and landed on his belly,
And the linemen jumped up, all shaking like jelly!
And then Jeff Reed came up, and went straight to work
As the ball was snapped, he kicked with a jerk.
The point after he kicked was right on the nose,
and straight through the uprights, that ball, it rose!
The clock then ran out, the refs blew the whistle.
The Steelers did win! And the Ravens did bristle.
And Tomlin spoke to reporters as walking out of sight,
"Happy Christmas to all! And to All a good night!"
Posted by Elliot at 10:10 AM

What an awesome poem! That put a smile on my face even though I don't like the steelers.