Steelers line let up NO sacks 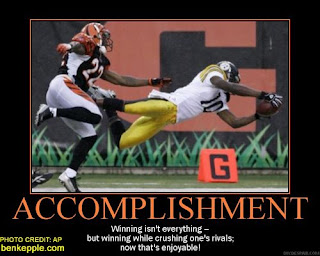 Today's game felt a little like playing a Madden football game with your 10 year old brother. Early in the game you put up points on your first two possessions and hold your brother to five straight three and outs. Then you start goofing around, and fail to score despite having terrific field position. When you quit paying attention, you repeatedly let up 7 yard passes that end up in a couple scores and with ten minutes left in the fourth quarter you realize that one big play could result in losing the game. Your little brother starts talking some smack, so you decide to put the game away. Ten minutes later, after scoring three touchdowns, including a late touchdown pass with a back up Qb, little brother is crying to mom.
Playing a greatly overmatched Cincy team, the Steelers managed to keep it interesting into the 4th quarter, but exploded for three touchdowns in the final eight minutes to ensure the experts will give them a good spot in the power rankings. The game started out promising with the Steelers scoring an opening drive touchdown, going almost exclusively with the pass. We then held Ivy League player of the year, Ryan Fitzpatrick, to five straight three and outs. We had great field position the whole first half, but couldn't put the game away early. Fitzpatrick then led a 14 play, 92 yard touchdown drive to get the game to 10-7 before halftime. I was scared that this would be a repeat of the NY Jets game from last year, but we got our stuff together down the stretch to win big 38-10.
Here are some quick hit thoughts about the game:
- Major kudos to the offensive line. NO SACKS ALLOWED. Joe Biden style, I repeat NO SACKS ALLOWED. And this was done with Marvel Smith out and Darnell Stapleton as our starting guard. On top of that, Mewelde Moore had 120 yards rushing.
- Our first touchdown of the game came on a great play action roll out with a short pass to Moore. Loved that we threw it to the RB. Second drive of the game, we have first and goal from the three. Now I love the play action in the first drive, but on first and goal from inside the five I'd like to see our O-line dominate and pound the ball with a couple runs. We go pass, pass, pass, FG. Now, either we have no confidence in our line to gain three yards or our O-coordinator is an idiot. Or maybe both. We did get stuffed on multiple 3rd and 1's. This is not good.
- Great job by Ben on Mewelde Moore's 12 yard rushing TD. He changed the play at the line of scrimmage and Moore went untouched to the left for a TD. Ben gets better and better as he gets more freedom.
-This is the second game in a row that we dominated the game in the first half, but the score didn't reflect it. With a tough schedule coming up, we need to take advantage of our opportunies.
- Hines Ward is lighting people up this year. He knocked Keith Rivers out for the season with a huge block early in the game. Despite the fact the play didn't draw a flag, Ward should be expecting another fine this week for unnecessary roughness.
- Troy might back him up by making another "this is a pansy league" comment. But he has no clue where he is after being steamrolled by Cedric Benson. Karma's a bitch.
- Woodley and Harrison are just amazing. They had 2 sacks a piece this week. Woodley caused and recovered a fumble. Timmons also added 2 sacks in the Steelers 7 sack day. Suffice it to say Fitzpatrick didn't face a pass rush like this from my Penn Quakers.
- Let's hope the injuries to McFadden and Polamalu aren't serious. We need them.
- Did we forget that Santonio Holmes is our big play threat? All of the deep balls are going to Nate Washington and he even got a handoff on a reverse. I love to see Nate producing, but let's take a couple shots a game with Holmes (Full disclosure: I own Holmes in multiple fantasy leagues.)
- It wasn't the prettiest win, but we dominated late and Ben kept his perfect record in Ohio. The Bengals are still winless and we have a 2.5 game cushion over Baltimore for first place in the AFC North. The line didn't let up a sack and we won without Willie Parker, Marvel Smith, and Casey Hampton. I'll take it.
- Next week: The battle to be named the best quarterback from the 2004 draft class. Manning vs. Roethlisberger. Giants vs. Steelers. I'm pumped and ready.
Posted by Josh at 10:44 PM