Arians Will Return Next Season 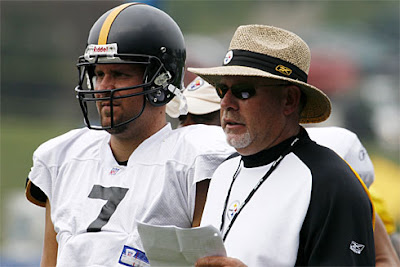 The Post-Gazette is reporting that for the third straight season, the Steelers will have the same coaching staff. This means that much criticized (in these pages and elsewhere in Steelers Nation) offensive coordinator, Bruce Arians, will be returning in that capacity next season. Although much of the criticism was deserved, especially for play calls that involved shotgun formations in third and one when we needed to run time off the clock, the Steelers did win the Superbowl this season. Once that occurred, any realistic expectation or hope that Arians or any of the coaching staff would be let go was gone.

It is harder to believe that no coaches were interviewed or hired by other teams. The only coach who even had a sniff of interest was linebackers coach Keith Butler (see post here) from the Arizona Cardinals aka Pittsburgh West. Interestingly, the Cardinals new D-coordinator was a former quality control coach under Bill Cowher.

In order to repeat as champions, you need to improve every year. Not big changes, but constantly tweaking to get better. The Patriots are the best at this in the NFL. The Spurs do this amazingly well in the NBA. The team that won this year on the offensive side of the ball was in no way a perfect team. We struggled to score for decent stretches of the season especially in the red zone late in the year as was witnessed in the Superbowl. We were inconsistent at best running the ball this season. We could not run time off the clock with long possessions when we needed to and we couldn't gain one yard by pounding it many times this season. We also gave up tons of sacks. Imagine if Ben wasn't the best QB in the league at escaping would be tacklers and making something happen. We could use some tweaks. One could have been getting rid of Arians and O-line coach Larry Zierlien. Maybe the draft will bring some new talent to the O-line. Maybe Ben will be permitted to call more plays next season. Whatever happens, tweaks need to be made somewhere to continue our improvement. We now know where the tweaks aren't happening, the coaching staff.
Posted by Elliot at 10:55 AM