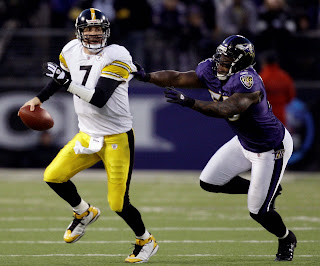 As if his performance in Super Bowl XVIII wasn't amazing enough, Peter King of CNNSI.com reports today that Big Ben played the Super Bowl with at least two fractured ribs. We're all used to questionable injuries to Big Ben (his self-proclaimed broken toes in a New England play off game come to mind), but these injuries were supported with an MRI that was taken after the Super Bowl. There was nothing that could have been done to treat the rib fractures and they were small enough to escape a not-so-secret X-ray done before the game. The injury didn't appear to affect the way Roethlisberger played. There were numerous times that Ben scrambled around defenders trying to make plays.

Roethlisberger likely suffered the injury in the AFC Championship Game on a hit by Ravens safety Haruki Nakamura.
Big Ben had this to say about the injury:
"Luckily, in the game, I didn't take any big hits to make 'em hurt. But I knew all along there was something wrong. There wouldn't have been anything they could have done about fractured ribs anyway. It was just suck it up and play.''
UPDATE: Turns out Big Ben could be making up another injury. ESPN reports that the Steelers had no knowledge of the alleged rib fractures. This could be another case of prima donna Big Ben trying to add to his own legend. Or it could be that the team is covering for Mike Tomlin's denial of Big Ben receiving x-rays before the Super Bowl.
Posted by Josh at 12:59 PM

That's it. I oficially off the bung hate wagon. He might still be a beast, but he knows how to win games.