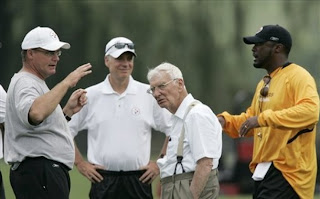 Yesterday, I reviewed the Steeler free agents going into 2009. There aren't many and if you don't want to read the entire post, here's the cliffs notes: sign BMac, Nate, and Max Starks. Sign some others if they are dirt cheap.
Now, let's dive into the hard stuff. The Steelers have some mega-stars entering the final year of their contracts. Here's the list: Brett Keisel, Casey Hampton, Willie Parker, Larry Foote, James Harrison, Ty Carter, Ryan Clark, Hines Ward, Justin Hartwig, Deshea Townsend, Heath Miller, and Jeff Reed. Ideally, the team could sign all of these guys to long term contracts, but that's completely unrealistic. 2010 is scheduled to be an uncapped year. I'm assuming that a new collective bargaining agreement will be reached. Most NFL owners know that one reason for the popularity of the NFL is the parity (or illusion of parity) provided by a hard salary cap and revenue sharing. But I digress.

Priorities, Priorities
For the last two years, James Harrison was named the Steelers MVP. For the last two years James Harrison made $1 million per year. Notice anything wrong here? Things are about to change. Deebo earned a major raise and Kevin Colbert has started conversations to ink the Defensive Player of the Year to a new deal. He is 30 years old, but only had two years of real wear on his body. After being cut four times, Harrison appreciates the opportunity given to him by the Steelers, but this is his last long-term contract. He needs to cash in to set himself up for a life of watching cartoons and lounging by the pool. If we're lucky, the deal will be similar to Troy Polamalu's contract of 4 yrs, $32 million. If we're unlucky, it's closer to Jared Allen's six year, $72 million contract. He's the best defensive player in the league. After two years of making less than Jeff Reed, Silverback's earned it.

Hines Ward is the heart and soul of the Steelers. More than any player in the league, Hines Ward is the personification of his team. His hard-nosed style has rubbed off on the young guys and he has one of the unquestioned leaders in the locker room. Oh yeah, he can still play too. At 33 years old, he had one of the best statistical years of his career. He needs to finish his career as a Steeler. Unfortunately, Hines has always had a major inferiority complex and will probably want to get paid like one of the best in the league. The Steelers rarely make long-term deal with players on the downside of their careers, but Mike Tomlin will definitely want to make a deal (similar to James Farrior) that enables Hines to retire in Pittsburgh. Please Hines, you are a rich man. You'll never have to buy a drink in the Burgh for the rest of your life. Accept a fair deal that keeps you here.

Jeff Reed is one of the best kickers in the league and one of the few that can kick at Heinz Field. Plus, he leads the team in drunken photos. Sign the man.

Ryan Clark allows Troy to be Troy. He also sacrificed his spleen for the team. Unless Anthony Smith or Ryan Mundy can develop in one year, sign the hardest hitting safety in the league.

Heath Miller is underrated and underutilized. Tight ends aren't the most expensive players around, but there won't be much money left after signing Deebo, Ward, Clark, and McFadden. It's going to cost at least $4 million per year to keep him. Matt Spaeth is worse than Heath at just about everything, but he was serviceable when Heath was hurt this year. I'd say it's 50-50 that Heath comes back.

Brett Keisel - The Steelers aren't deep at defensive tackle, but Keisel isn't getting any younger. He's already 30. There isn't any one on the roster that can replace him, so let's keep him. I hope my enthusiasm didn't get you too excited to keep reading.

Willie Parker - Parker's been hurt the last two seasons. Delicious Mendenhall and Mewelde Moore are waiting in the wings. Even though the Steelers are 7-0 in the playoffs when Willie starts, another team will pay more than Pittsburgh.

Casey Hampton - He's getting fat and old. He can still be dominant, but it'll cost too much. Aaron Smith means more to the D-line than Big Snack. We'll miss him at beer pong tailgating and Penguins games

Larry Foote - You were an integral part of two Super Bowl winning teams. You never got much credit, but you were always solid. It's sad to see you go, but Lawrence Timmons is waiting in the wings. I just hope you aren't cut before next season.

Justin Hartwig - He's an average center who appeared much better than he is because he replaced Sean Mahan. He'll play out his contract and hopefully Stapleton or a new draft pick can take his spot.

Deshea Townsend, Ty Carter - Aging secondary guys. If necessary, e can re-sign them at when their contracts expire.

So there you have it. Sometime next week I'll address each position group and discuss the focus for the upcoming draft.

Voice your disagreements in the comments section.
Posted by Josh at 6:54 PM