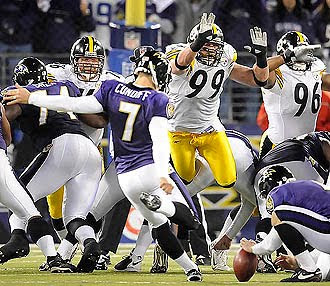 It was a valiant effort by our boys yesterday. Despite playing a quarterback with one career pass attempt and missing the best safety in the league, the Steelers fought the Ravens into overtime. But, you know what they say, a loss is a loss.

Some thoughts from the game:
- Leave it to the Steelers to turn a game they likely should have lost into a game they should have won into a game they lost in excruciating fashion. Even though I should be used to it by now, I still lose way too much sleep over this team
- In a game that has a thousand moving parts, it seems foolhardy to blame one aspect of the team for a loss. Having said that (Curb Your Enthusiasm, anyone?), this loss gets pinned on the defense. Again. The defense put Dennis Dixon in a hole early by allowing an opening drive touchdown and a 90 yard touchdown to end the half. It played much better in the second half, forcing two turnovers and preventing a late game winning drive by the Ravens. But given a 3 point lead by Dennis Dixon with less than 5 minutes remaining, the defense allowed another game tying drive. It was especially excruciating, because the team had the Ravens at 3rd and 22 from their own 3o. The defense promptly allowed a 17 yard completion and then decided to let James Farrior cover Ray Rice on 4th and 5. Farrior is a great leader, but his old balls should no longer be covering anyone that can be described as quick, shifty, or fast. Tell Farrior to cover Todd Heap's old balls, and let Timmons chase down Ray Rice.
- Kudos to Dennis Dixon, the Steelers offense, and Bruce Arians. Dixon played very well through regulation and avoided making a turnover or taking a sack. He engineered a great 4th quarter drive to take the lead and showed his ability both passing and running the ball. No shame in being fooled by a zone blitz. It's just sad that it happened in overtime to lose the game. I thought Bruce Arians put together a nice, conservative package for Dixon to run. I would have liked to see a few more running opportunities similar to the long touchdown run, but with no reliable back up quarterback, it was wise to limit the number of hits on Dennis Dixon.
- Kudos to Dennis Dixon's dad for wearing the old school Pirates hat. The shots of Dixon's dad and sister celebrating after his touchdown run were awesome.
- The Steelers had their opportunities to win - 4th and 5, near Deshea Townsend interception in overtime, Dixon leading Mike Wallace out of bounds on a deep pass - but it was the Ravens that made the plays when it mattered most.
- I'm not sure it is ever going to happen, but I'm excited to see a healthy Lawrence Timmons play with a healthy Troy Polamalu. Timmons was a game changer against the Ravens with two explosive sacks and a forced fumble.
- It took five games, but the Steelers finally missed Aaron Smith. It's been a long time since a team ran successfully on the Steelers, but the Ravens pushed around the Steelers d-line. Give major credit to their offensive line and to Ray Rice, who looks like a superstar who should not be losing carries to Leron McClain or Willis McGahee.
- Ramon Foster acquitted himself pretty well for an undrafted free agent starting his first game. In fact, the o-line did a great job on blitz pick up protecting their young quarterback.
- Congrats to the special teams for not allowing a touchdown return. The punt coverage was shaky, but no return touchdown is a step in the right direction. Who knew Corey Ivy and Rocky Boiman could have such an impact?
- The Steelers have a longer road to make the playoffs than a team that starts out 6-2 should, but, given three consecutive losses, they still have a strong shot at a wild card spot. Although they would currently lose the tie breakers, they are tied for the 2nd wild card spot with Baltimore and Jax. If the Steelers win out, they would definitely make the playoffs. The more likely scenario is the Steelers lose one game, but beat Baltimore, to finish at 10-6 and grab the last spot. It's not that unlikely, considering the Steelers should take care of business against Oakland and Cleveland in the next two weeks. That would put them at 8-5 with games remaining against Green Bay and Baltimore at Heinz Field and a week 17 match up in Miami. It's more difficult than I would like, but it's eminently doable.
- That's all I have time for. What are your thoughts? Moral victory or another blown opportunity?
Posted by Josh at 10:20 AM

Agree with everything you say Josh. Didn't like the play call that produced that turnover in OT. Why have an inexperienced QB drop-back and throw from the pocket into zone coverage. Even Collinsworth was smart enough to suggest a bootleg, misdirection, or some play that would get Dixon into space with a smaller window of the field to work with. Also, give him the option to run if he doens't like what he sees.

Also, I like the sacks, the QB pressure, and the way a healthy Timmons is playing, but this D is missing WAY to many tackles and blowing coverage all over the field. This secondary is average at best without Troy. It's scary to imagine what a Peyton Manning or Tom Brady would do to this unit.

You know what's deflating... the fact that no one comments back to me...

I'm sorry Scerb, I haven't had the time or heart to look at Steelers shit lately. Im getting crushed in school and work much like the STeez are on the field. I agree the defense blows and I didnt like the playcalls in OT and really thought there should have been more calls with run options for DD