Who wants it more? 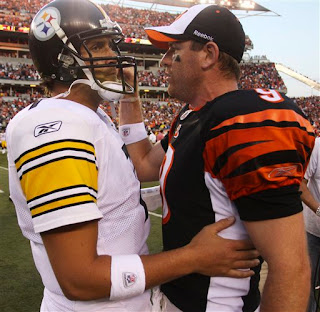 It's certainly a surprise to hear the words "Cincinnati Bengals" and "important AFC North match up" in the same sentence. But, with the Baltimore Ravens struggling and the Bengals at 6-2, it's not a stretch to say that Sunday's game is probably the most important regular season game on the schedule.

The Bengals are the surprise team of 2009. Carson Palmer is returning to pre-Kimo Von Oelhoffen form. Cedric Benson is running like he was at Texas. The offensive line improvement, without #1 pick Andre Smith, is even more surprising than the Steelers improvement at O-line. And the Bengals defense has turned into a smash mouth unit.

I can't provide a detailed breakdown as good as the one at SteelerFury, so I'll link you there and be done with it. (Beware of a little homerism)

Instead of dissecting individual match ups to see who has the upper hand, I want to analyze the remaining schedules for the Steelers and Bengals to determine just how important this game is.

Both the Bengals and Steelers sit at 6-2, but the Bengals currently hold the tie breaker due to a better AFC North record. Even if the Steelers beat the Bengals this weekend, the team will still have to beat the Ravens twice to equal what Cincy has done in the division. If Cincinnati wins on Sunday, the Bengals will have a one and a half game lead in the division. Insurmountable? Let's find out.
After the Pittsburgh game, the Bengals play:
@ Oakland
Cleveland
Detroit
@ Minnesota
@ San Diego
Kansas City
@ NY Jets
Football outsiders ranks it as the second easiest schedule in the league. It's really tough to find a scenario where Cincy doesn't win at least 11 games. Cincy should go on a three game winning streak after Sunday (Oak, Clev, Det) and will have no trouble beating Kansas City. I'll give the Bengals a 1-2 record against Min, SD, and NYJ. That places their record at 11-4 without the Steelers game. If they beat the Steelers, Cincy would be 12-4 on the season, meaning Pittsburgh could only win the division by winning all of their remaining games.
Pittsburgh's remaining schedule looks like this:
@ Kansas City
@ Baltimore
Oakland
@ Cleveland
Green Bay
Baltimore
@ Miami
Let's give the Steelers wins against KC, Oakland, and Cleveland. I'll be generous and give the Steelers wins over GB and Mia. Then, let's assume we split with Baltimore. This gives Cincy the tie breaker. Those assumptions put Pittsburgh at 12-3.
Meaning a win against the Bengals wins the division and a loss against the Bengals loses the division.
So there you have it, this game will decide the AFC North winner.
Kidding.
The scenarios above are generous to the Steelers. Meaning, even if the Steelers win on Sunday, if they would drop an extra game (say to Mia or GB or Balt) or Cincy went 2-1 against SD, Min, and NYJ, the Bengals would still win the divison.
This game means more to Pittsburgh in the AFC North division race than it does to Cincinnati. If the Bengals win, the AFC north division is theirs, unless (maybe even if) Pittsburgh wins out. If Pittsburgh wins, it will be a competitive race to the end.
Barring major injuries, both of these teams should be locks to get to at least ten wins and make the postseason. And that's all that matters.
Because remember, Cincinnati won the AFC North in 2005. The Steelers won the Super Bowl.
Posted by Josh at 10:51 AM