When Should Troy Return - Part 2 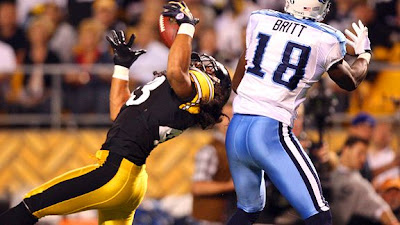 After Troy got injured in the first game of the season, the debate began as to when he should return. I argued here, that he should delay his return until he was fully healthy because of the relative ease of our schedule at that point and the upcoming bye week. This time around, the injury does not seem as serious as the first time Troy injured his knee. Mike Tomlin said the news on the knee was encouraging, according to PFT. The TRIB is reporting that Polamalu was seen walking around the Steelers facility without crutches or even a limp which is most definitely an encouraging sign, however both Tomlin and Ed Bouchette of the PG suggested that Troy is questionable at best for Sunday's game against KC.

Since this is the second time Troy has injured this particular knee this season, I doubt he will be brought back till fully healthy. The Steelers need Troy for the playoffs and do not want to risk any permanent damage to Troy's knees. If it really isn't that serious he will probably miss 1-3 weeks. My opinion would be toward the longer end of the range for precautionary reasons. If you look at our remaining schedule, it really is not that difficult. Here are the remaining games:

The only game in the next four I would want to have Troy for would be @ Balt in two weeks but I think we can afford to hold him out until GB if the injury requires that much time. We should easily beat KC, Oak and Cleveland without Troy in the lineup. I am not as concerned as I normally would be with Baltimore after watching their pathetic first half performance last night against the Browns. I am all for bringing Troy back as soon as he is 100% healthy or as close to it as possible, but I think the schedule gives us the luxury of holding him out until that occurs. We may not need him to win regular season games, but we will need him come playoff time.
Posted by Elliot at 1:02 PM

Having to blog about this again blows!!! Damn John Madden!!!

Why did it only hit Troy and not Larry Fitz?

Shaft. What gives? It's still a long season. Maybe Fitz gets it for the end of the season and playoffs and Troy becomes magically healed.