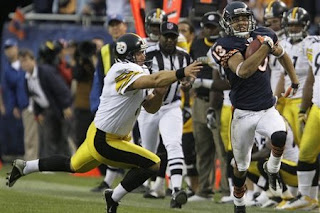 The mainstream media likes to cover certain things about the NFL. Quarterbacks - particularly those that wear Wranglers - diva wide receivers, discussing the death of parity, defenses that force lots of turnovers, and controversial coaching decisions. As I often noted last year, when the mainstream media starts writing stories about the struggles of your offensive line, it's a major problem. This year, the mainstream media is recognizing the new depths of the Steelers special teams. Probably a sign of how bad it has become.

I figured I'd throw out a couple articles and thoughts about our not so special teams:

- According to Football Outsiders, the Steelers kick off team is nearing the record for worst special team unit since they started tracking special teams in 1994. Not only does Jeff Reed have the worst kick-offs of the year, but Pittsburgh has the worst coverage too, and by a healthy margin.

- Mike Tomlin made headlines by smacking down Stefan Logan this week when Logan remarked that lanes open on Steeler kickoffs, but not on Steeler returns. "That's the perspective of a kick-returner who hasn't run one back yet, so that perspective may not be reality," Tomlin said.

I certainly respect Coach Tomlin for how he handles the players (his handling of a disgruntled Willie Parker last year was excellent), but Logan has a point. Logan never has return lanes on kickoffs or punts. He's basically surrounded immediately and has to fight for everything he gets. I doubt Josh Cribbs would be anything special if he had Pittsburgh's blocking.

Judging by the blogging world, there seems to be a decent portion of Steeler nation that are so disappointed in Logan this season that they think he should be cut. That it's a waste of a roster spot when he hasn't returned a kick for a touchdown. I disagree that Logan has been that bad. And he is still better than any returner we've had in Pittsburgh since Randle El. But I do agree that it's a waste of a roster spot if he has no blocking up front.

- Any thoughts out there on Bob Ligashesky, the Steelers special teams coordinator? Normally, if a unit is playing this badly, fans are clamoring for a firing. But Ligashesky's coverage unit was the best in the league last year (ignoring all the special team returns in the playoffs) and now it's the worst in the league. Is it coaching, lack of talent, or lack of desire?

- Steeler Nation should take it easy on Jeff Reed for his tackling ability (or lack thereof). Kickers across the NFL look foolish weekly when trying to make tackles. The coverage unit has failed if the kicker is making a tackle. So let's stick with criticizing Reed for his terrible kickoffs and poor judgment off the field. After all, not every kicker can tackle like Mitch Berger (2:45 into the video - let's be honest, I just wanted to post the AFC Championship highlight)


- Arnold Harrison was cut this week to make room for Donovan Woods, who is supposedly a better special teams player. Don't expect much improvement solely because of Woods.

- On the subject of roster changes, is anyone else interested in Steve Hauschka, the now unemployed former Ravens kicker? Sure, he sucks at field goals, but he was a kickoff specialist last year. That sounds like a better use of a roster spot than Keiwan Ratliff.
Posted by Josh at 9:57 AM