Throw to the Running Backs! 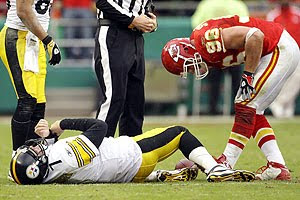 Give credit to the guys over at PostGameHeroes who have been on Big Ben and the Steelers for the last two years about the lack of throws to running backs. There is much to be said for hitting vertical throws downfield, but, the best offenses take what's given to them. Especially, when the alternative is a sack or interception. By no means do I want Big Ben to lose his playmaking drive, but fewer sacks and interceptions, along with major match up advantages isolating Rashard and Mewelde vs. a linebacker, means better drives from the Steeler offense. The lack of throws to running backs made more sense when Willie Parker was the starter, because Willie is a terrible pass catcher. But with Mendenhall taking over, the pass to the running back would add another dimension to the offense.
Jason Cole at Yahoo! Sports has picked up on the story as well. Although he focuses more on extending Roethlisberger's career by limiting hits, than the improvement of the offense.

With 8:35 remaining in regulation on Sunday at Kansas City, Roethlisberger hit running back Rashard Mendenhall with an 8-yard touchdown pass to take a seven-point lead. It was a beautiful, tight throw into the teeth of the Chiefs defense. It was Mendenhall’s first career scoring reception and one of a career-high four passes he caught on the day.

Those facts are significant because the overall success of Roethlisberger, and the Pittsburgh offense, is greatly impacted by plays like that one.

While Indianapolis Colts quarterback Peyton Manning has thrown eight touchdown passes to current running backs Joseph Addai and former Colt Dominic Rhodes
during the past two seasons, Roethlisberger only has four to his three tailbacks (Mendenhall, Mewelde Moore and Willie Parker) in the same period. Ultimately, Roethlisberger would be wise to make more use of his running backs, who have combined to catch only 81 passes since the beginning of 2008 (the Colts trio has 115).