Should Troy come back this week? 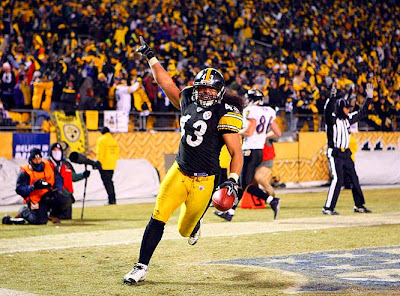 The Post-Gazette has a report today that Troy may start practicing this week. Who knows what this really means for the actual activity level he will be subjected to. It could mean he may just start doing some running and non-contact drills or it could mean he returns to full practices. It does not necessarily mean that he will play this week at Detroit. It is probably just some preliminary testing to see where his knee is at physically. My question is why bring him back this early?

I can understand if the knee is close to being 100% why they would want to bring him back. The D has clearly struggled in the 4th quarter without him. However, our next two games are against Detroit, while improved is still far from a good team, and Cleveland, possibly the worst team in the league. The Steelers should have beat Chicago and should have beat Cincinnati without Troy, they did beat SD without him. I don't think we need Troy to beat either Detroit or Cleveland. I would much rather have Troy back at 100% for the end of the season run and the playoffs than for games against the league bottom feeders. The Steelers are currently 7th in total defense, although the pass D has dropped to 17th without Troy.

The Steelers should be 4-2 after wins against Detroit and Cleveland. The game after Cleveland is Minnesota at home. If Troy is fully healthy, I would bring him back for that game. If not, the week after Minnesota is our bye week and he should be ready to go the week after that on Monday night in Denver. I see no reason to rush him back and possibly jeopardize the rest of the season. I know the D needs him, just not yet.

UPDATE: Here is a quote from Coach Tomlin's press conference today regarding Troy:

"Some injury issues, I’ll start with Troy (Polamalu). You guys probably want to hear about Troy. Troy’s been doing well and progressing well. He may participate in a limited basis tomorrow in practice with a brace on, some individuals (drills); just see how he runs around and changes direction. Last week he ran some in a straight line to pretty solid reviews, so we’ll take another step to see where he is. What that means for his game participation is unclear to this point. Really, we just want to get him out there on the practice field and see how he responds to that and then kind of proceed from there. So, anticipating him participating in a limited fashion, in some form or fashion, here maybe as soon as tomorrow."
Posted by Elliot at 1:08 PM

Doesn't matter when we bring him back, John Madden will sanp that knee again immdiately for the rest of the season. Is it Thursday yet, I need some Tomlin!!!!!