AFC Champs: Look to the QBs 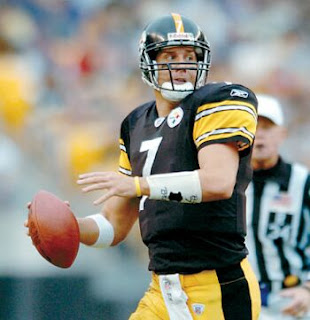 The Steelers' struggles, especially at home, in the AFC Championship game are well documented. Since 1994, the team is 2-4 in the game preceding the Super Bowl. Frequently, the Steelers were favorites in these games and all of the losses helped to brand Bill Cowher as a big game choker. However, one needs not look much further than the QB match ups to realize that Pittsburgh was regularly outmatched at the most important position in the game.

1994: Pittsburgh vs. San Diego
QB matchup: Neil O'Donnell vs Stan Humphries
Pittsburgh was a double-digit favorite in this game at Three Rivers Stadium. Steelers TE Eric Green was so confident that he started discussions for a Super Bowl rap video. Midway through the 3rd quarter, Pit was leading 13-3 and the defense was suffocating Humphries and the Chargers. But, Humphries came back with two 43 yard touchdown passes and Neil O'Donnell couldn't get the ball to Barry Foster on 4th down.
Stan Humphries was a solid pro. His career was less illustrious than Neil O'Donnell, but neither of these signal callers would go on to hall of fame careers. The Steelers flat-out choked in this game.

1995: Pittsburgh vs Indianapolis
QB matchup:Neil O'Donnell vs Jim Harbaugh
A year after the meltdown at home against San Diego, the Steelers once again hosted the AFC Championship game. The Colts were on a miracle run of their own. They snuck into the playoffs with a 9-7 records, but Jim Harbaugh, Marshall Faulk, and company beat the Chiefs in Arrowhead Stadium to advance to Pittsburgh. Trailing 20-16 with five seconds left, the Colts had the ball at the Pit 29 with time for only one more play. Harbaugh's hail mary appeared to be caught, but was dropped at the last second by Aaron Bailey.
In another match up of crafty veteran QBs, O'Donnell survived against Harbaugh. The Steelers clearly had a better team, but Harbaugh had some magic to keep it close.
1997: Pittsburgh vs Denver
QB matchup: Kordell Stewart vs John Elway
Do I really need to explain? Kordell against Elway. A Steelers punch line vs one of the best of all time. The Steelers outplayed the Broncos, but couldn't overcome Kordell's mistakes. Kordell turns the ball over four times. Broncos advance and Elway wins his first Super Bowl.
2001: Pittsburgh vs New England
QB matchup: Kordell Stewart vs Tom Brady/Drew Bledsoe
At the time, Kordell was the more experienced quarterback. Little did we know that this quarterback mismatch is almost as lopsided as Kordell vs. Elway. The Steelers were clearly the more talented team, but thanks to two New England special teams touchdowns and a late drive by Bledsoe, after Brady got hurt, New England was able to pull it out. Kordell throws two late interceptions and the Kordell Stewart era soon comes to an end.
2004: Pittsburgh vs New England
QB matchup: Ben Roethlisberger vs Tom Brady
Big Ben was 14-0 in his rookie season, but he was still a rookie going up against a two-time Super Bowl champion. Roethlisberger threw 3 interceptions, while Brady was nearly perfect. Despite the loss, Steelers fans were excited to finally have a quarterback worthy of playing in a big game. But still, Brady vs Big Ben (and Belichick vs Cowher) was a mismatch too big to overcome.
2005: Pittsburgh at Denver
QB matchup: Ben Roethlisberger vs Jake Plummer
For perhaps the first time on this list, the Steelers finally have the better quarterback. Even though the team was on the road, the superiority of the quarterback made all the difference in getting the Steelers over the hump. Big Ben and Cowher get their first rings.
2008: Pittsburgh vs Baltimore
QB matchup: Ben Roethlisberger vs Joe Flacco
This match up clearly favors Big Ben and the Steelers. Ben is in his third AFC Championship game and is 6-2 in his career in the playoffs. Flacco is a rookie that's carried by a strong running game and a defense that forces turnovers. Who knows if we willlook back at this game as the start of a brilliant career by Flacco or if we'll look back and say that Pittsburgh won because of clear superiority at the quarterback position.
Posted by Josh at 6:15 PM