Apparently Someone Hasn't Heard of The Curse of The Terrible Towel

Watch as the mayor of Phoenix disses the Terrible Towel. He is messing with the wrong towel and messing with history. Who can forget when TJ Housmandzadeh shined his shoes with the Terrible Towel after the Bengals beat us at Heinz field? That was the year we lost the division to the Bungles but we exacted our revenge in the Playoffs by beating Cincy in the Wild Card round and going on to win the Superbowl. 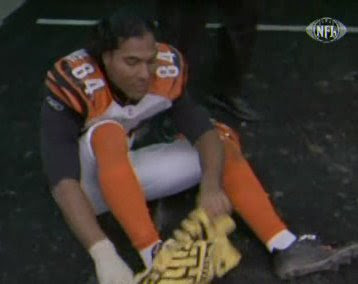 This season someone dared dis the Towel again. Lendale White proceeded to stomp on the Towel after Tennessee crushed us in their stadium. After Lendale put his stinky feet on our Towel, the Titans proceeded to lose to Indy in the season finale. Then they got ousted from the playoffs by the Ravens.

Now comes the latest assault on the Towel by the mayor of Phoenix. Maybe he was not aware of the curse or maybe he decided to throw caution to the wind and tempt the football gods. Either way I don't think it was a smart move.
Posted by Elliot at 9:16 PM