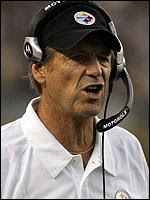 Per PFT, rumors are flying around the airwaves and now the internet that after the Superbowl, Steelers Defensive Coordinator Dick LeBeau will retire. He is 71 years old so it is not all that surprising. Now we have to start asking who his possible replacement candidates would be. He will be an extremely tough act to follow, especially after this season in which the Steelers D was ranked as the best D in the league. Could this also open up the possibility of switching to a 4-3? Tomlin was a 4-3, Tampa 2 guy before taking the Steelers job. After he was hired there was a lot of speculation that the Steelers would be switching to the 4-3. However, the personnel we currently have does not lend themselves to the 4-3.

I personally hope these rumors are false. Either way, if he isn't retiring this year, retirement isn't too far off given his age. I am thankful for everything he has given to this team and wish him all the best in whatever he does after this year. If this is it, let's at least send him off with an inspring defensive performance and a Superbowl victory.
Posted by Elliot at 12:18 PM