Third Time not a Charm: Steelers to Super Bowl 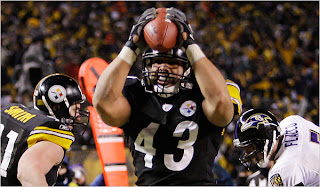 As crazy as this NFL football season has been, there has been one constant with the Pittsburgh Steelers. They win, and its usually ugly. The Steelers outplayed the Ravens for four quarters on Sunday, but needed a late pick 6 from Troy Polamalu to assure themselves of the franchise's 7th trip to the Super Bowl.

On a day that Willie Parker was repeatedly stuffed by the Ravens (24 carries for 47 yards and a fumble) and Limas Sweed got significant playing time (Hines missed the final three quarters due to injury), Ben Roethlisberger played another solid game, completing 16 of 33 passes for 255 yards, 1 TD, and 0 interceptions. If not for several drops, these numbers would have been more like 315 yards for 3 tds.

Despite Big Ben's play, the game was controlled by the two defenses. Neither offense gained 300 yards (Pit - 275, Bal - 198). The Ravens had 13 first downs, the Steelers had 11. But the major difference in the game was turnovers. While Big Ben was mistake free in this area, Joe Flacco threw three interceptions that led directly to 10 points. Joe Cool finally looked like a rookie.

The Steelers special teams unit hardly looked special. Mitch Berger averaged 28.3 net yards per punt, which understates how badly he played. The Steelers allowed another long punt return that led to the Ravens first TD. And if not for a stupid penalty by Baltimore on another poor punt in the 4th quarter, Steelers fans might be watching the Ravens in the Super Bowl.

Other random thoughts from the game: