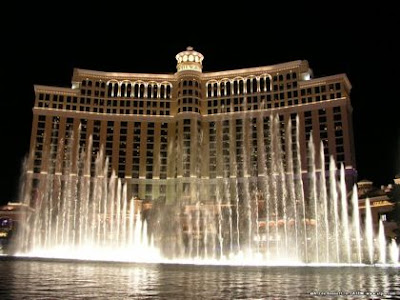 The Steelers are 3-0 in games we have been in Vegas for (Jets, Indy, Baltimore).
I have been claiming to the SteezBros for sometime now that I am going to write a post about the picture that adorns the top of our site. After our latest escapades in Vegas, I think the time is ripe to finally make good on that promise. It has become somewhat of a tradition or maybe a rite of passage in our family to head for Vegas as soon as possible after attaining 21 years of age. I went when I turned 21. Then we went for Josh's 21st and sometime between Josh turning 21 and Alex turning 21 it became a yearly tradition to go to Vegas over Martin Luther King Day weekend.

MLK weekend worked great for us because we didn't have to use vacation to get a long weekend and the NFL playoffs are going on over that weekend. There is nothing like being in Vegas for some NFL playoff football. The first year we went over MLK weekend was Ben's rookie year. That year the wild card round occurred over the weekend so games occur on Saturday and Sunday. 4 games in Vegas is sweet but it can be draining for your wallet and energy wise. Your wallet is self explanatory. Energy and health wise, I will expand on. (If you want to skip directly to the story of the picture, skip the next couple paragraphs)

For me, the only place to watch football in Las Vegas is the Bellagio Sports Book. I have been to
many sports books in Vegas and I can say without hesitation the Bellagio has them all beat. First, drinks are free no questions asked (besides tipping the drink girl) and you can request what type of say vodka you would like i.e. Grey Goose. Many other books require betting over a certain amount to score free drinks ($300 at Caesars). Others only provide you a certain amount of drink coupons when you make a bet. Second, Bellagio has the best and biggest screen to watch the game on. Also they have 40 plush leather seats for you to sit in. Here is where energy level comes in. This past Sunday in order to secure seats for the game for 6 of us, I arrived at the Sports Book at 6:45 A.M or a game that started at Noon. During the Wild Card weekend, games on Saturday would start at 10 AM in Vegas so you would need to be there even earlier on Saturday, then drink and watch games all day. Sunday would be a repeat. It's a little easier to do it all when there are only games on one day.

Another thing that is amazing about being in the Sports Book for the playoffs are the ease of wagering and the amount of things you can bet on. One of my favorite things to bet on is who will score the first touchdown of the game. Also, there is college basketball, pro hoops and hockey going on in case you want to wager on something else while you are waiting for the football games to start. By the time the games actually start the book is packed with fans, 90% of which have some sort of wager on the game. Practically every play is cheered for by someone because they have a bet on something obscure that was effected by the play that just happened. When a big play happens it's like being at the game.

One thing you need to know about my brothers and I is that we can't normally handle watching the big games with a large amount of people because we are so nervous. We also can't stomach any comments that other people make especially predictions that we have the game in the bag, we are going to win, we are going to lose. Basically we can't stand anything anyone says. We are also a little superstitious about some things.

The first game we ever watched of the Steelers in Vegas was Steelers-Jets in Ben's rookie year. If any of you remember this game it was a rollercoaster ride that we probably should have lost. The Jets missed to field goals at the end of the game and we somehow prevailed. The next year is where the picture at the top of this Blog comes from. The next year was our Super Bowl victory year. The game we were in Vegas for....Indy.

To start with, we had a gnarly crew out there that year, almost all of us Steeler fans but my one friend, Dave, who is in the center of the picture is a die hard Eagles fan from Philly. As many of you are aware, Philly fans and Steeler fans do not always see eye to eye. However, on this day he saw all of us decked out in our Steeler regalia, and wanted to join in the fun. We, being the superstitious Steeler fans that we are, were not too keen on allowing an Eagle fan to wear one of our Steeler Jerseys on the day of a huge game. He proceeded to beg us to allow him to wear the jersey, calling us every name in the book. Finally, we felt bad for him since he had known nothing but losses in his fan life and permitted him to don the jeresy with one condition. If, for any reason at any time during the game we requested that he take off the jersey, he had to immediately remove the jersey no questions asked. He agreed to this request.

Right before kickoff, a mystery woman appeared before my brothers and I. She made the following prediction: "Steelers will win. Their lines will dominate and they will win." Then she disappeared never to be seen or heard from again. We just looked at each other dumbfounded. Then the game Started and the Steelers drove down the field easily twice and took a 14-o lead and no one could believe it. In the 2nd half the Colts started to figure out our D and began crawling back into the game. When Troy seemingly intercepted a Peyton Manning pass late in the game, it all seemed to be over until the play was reviewed. Josh then said to me," If they overturn this interception and Indy goes down and scores, I am out of here." I didn't really think he was serious. Then in one of the worst calls ever, the interception was overturned. Then the colts drove down the field and scored. At this moment, I contemplated forcing Dave to remove the Steeler jersey he was wearing but I didn't because I looked around for Josh to ask him whether we should make Dave take off the jersey and he was nowhere to be found! After that craziness ensued. Indy has one last chance to drive, Steelers sack manning twice and force a turnover on downs at the 3. Steelers ball. Indy has their timeouts though and only down three they could get the ball back and get into field goal range if the Steelers just kneel on it four times. So the give the ball to the Bus and, unbelievably he fumbles. Nick Harper, who was stabbed a few weeks earlier in the leg, picks it up and is returning it for a sure touchdown but Ben grabs him by the shoestrings and trips him up at midfield. The sports book was going crazy! The Steeler fans were apoplectic. After a few completions an endzone shot, the colts line up for a field goal to send the game to overtime. Ultra reliable kicker Mike Vanderjagt was kicking inside to tie the game. The kick went up and we knew immediately that it was no good! We won! About 10 minutes after the game ended, Josh showed back up. He had gone to the room and read his book. He did not watch anything that happened in the game after the interception call got overturned and the colts scored. He missed the fumble, the tackle and the missed field goal. He said that if we had blown that game and he watched it, he wouldn't be able to be a Steeler fan any longer. And that is the story of the picture. Finally.
Posted by Elliot at 12:17 PM