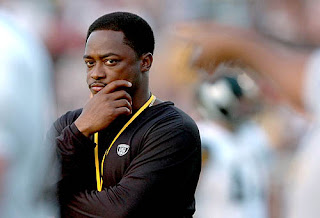 Mike Tomlin made two controversial calls against the Chargers. Here we take an in-depth look at them both to see if Coach Tomlin made the right decisions.

The Situation: The game was tied at 7 midway through the second quarter. Both teams were struggling to move the ball. Pittsburgh faced a 4th and 1 near midfield.

The Decision: The Steelers attempted a fake punt. The ball was snapped to the up man, Ryan Clark. Lawrence Timmons pulled from the outside, but was too late to block the Ravens pressure up the middle. Clark lost 4 yards and the Chargers took over with great field position. After gaining one first down, the Chargers kicked a field goal to take the lead 10-7.

The Reasoning: Mike Tomlin talked about the decision after the game and explained that he wanted to send a signal to his team that he would play aggresively. Tomlin also wanted to give his offense a spark, since, up to this point, the offense had been held scoreless.

Our take: Typically, fake punts and trick plays are called around midfield. If they work, the offense is very likely to score points. If they don't, the defense has a chance to get a three and out without surrendering points. The Chargers were obviously prepared for the fake punt and it seemed like Tomlin made a poor decision with the call.

At this point in the game, the Steelers were winning the field position battle and the defense had held the Chargers offense to 22 yards in their previous four drives. Traditionally, the Steelers would punt and hope to get the ball back in good field position. It's not the aggressive play, but it certainly seemed to make sense at this juncture.

If Tomlin wanted to play aggresively to show confidence in his offense, I would have preferred that he went for it on 4th and 1 with the offense. The team had success early with the running game and was winning the physical battle. I think the better aggressive play would have been to send the offense on the field, not to try a trick play that hasn't been used all season.

Although the play failed and San Diego scored points, the Steelers offense played incredibly well for the rest of the game, scoring touchdowns on four of their next five possessions. The fake punt was widely criticized after the game, but Jason Whitlock at foxsports.com wrote this in his NFL Truths column:

Memo to Boomer Esiason: Mike Tomlin's fake punt worked.
Where Boomer Esiason saw an ill-advised fake punt, Jason saw a move that sparked the Steelers' offense. At the time of its implosion, I hated Tomlin's second-quarter fake punt. The Chargers blew it up and used the good field position to score a quick field goal. By the time Ben Roethlisberger and the Pittsburgh offense responded with their first scoring drive of the game, it was clear that Tomlin's gamble paid off.

Tomlin called the fake because he wanted to spark his stalled offense. Big Ben and the O had done nothing. The botched fake and three-point deficit created a sense of urgency that snapped Big Ben out of his funk. You could see that by halftime when Esiason wasted breath criticizing Tomlin for the risky play. Pittsburgh's offense was lethal after the fake punt

Goal line plunge on 4th and 1

The Situation: The Steelers were winning 21-10 at the start of the 4th quarter. The team had a 4th and goal at the 1, after Gary Russell was stopped for no gain on a 3rd and 1 run.

The Decision: Mike Tomlin decided to go for the touchdown and called a fullback dive with Carey Davis. Davis bobbled the hand off and was stuffed for no gain. The O-line got little movement, but Davis lost power when he tried to get a handle on the ball.

The Reasoning: A touchdown in this situation would have given the Steelers a virtually insurmountable 28-10 lead with one quarter to play. It was another example of Tomlin's aggresive nature. He was playing to win the game.

Our take: Typically, I'm a big fan of playing aggresive football on 4th and inches. But in this case, I was hoping for a more conservative approach. My argument was more about momentum than it was about aggresion. A field goal would have given the Steelers a 14 point lead with less than one quarter to play. At this point, the Steelers defense was well rested. The fans were loud. Momentum was clearly in our favor. I thought that a 14 point lead, with the #1 rated defense and an enthusiastic home-field crowd sounded pretty good with 14 minutes left to play. If the Steelers went for it and got stopped (not an unrealistic proposition since the team is 3-12 on 4th down), it would shift momentum and energize the Chargers team. I definitely endorsed the safe play.

However, unlike the fake punt, I don't think Tomlin made a bad call here. There were logical reasons to play for the touchdown. This was the aggressive call. A touchdown puts the game out of reach. He put trust in the offense and hoped that success would put the 4th down woes of the regular season behind them. Even if unsuccessful, San Diego gets the ball on the 1 yard line and has to drive 70 yards to even get into field goal range. So, the reasons for Tomlin's decision were there. I was just more concerned about momentum and running out the clock, than going for the jugular. In this case, I'll agree to disagree.

Even though Carey Davis was stopped short of the goal line (I strongly disagree with the decision to give Davis the ball), the defense stopped the Chargers, the Steelers got the ball back and subsequently scored the game icing touchdown.

Summary
Despite the failure of both play calls, I welcome the aggression from the coaching staff. This attitude served the team well and the offense came out with a confidence that hasn't been seen all year. Let's just hope the aggresive play calling against the Ravens is well calculated, as opposed to reckless.
Posted by Josh at 6:03 PM