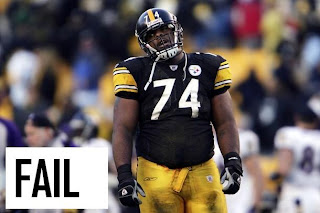 I know the Steelers just made the Super Bowl and all, but that's never stopped a Pittsburgh fan from complaining. My crusade to replace our offensive line and offensive coordinator will not stop until a.) BA is fired b.) Willie Colon is replaced c.) Steelers win two consecutive Super Bowls. So here are some glowing reports about your favorite O-lineman and coordinator.

Right tackle: Willie Colon, PIT
This is likely the first time a lineman on the All-KCW team will play in the Super Bowl, but Colon's appearance is well-justified. The Steelers were dead last in runs to right tackle, 19th to right end. Colon committed 11 penalties and allowed 5.5 sacks.
Not to mention that he has been penalized three times this year for not lining up on the line of scrimmage.

As for the Pittsburgh offense -- ye gods. Pittsburgh won the AFC championship despite getting just 11 first downs. It's not that the offense was excessively conservative; Steelers coaches called 39 passes and 26 rushes. But the running game was poor, blocking often jumbled, and Ben Roethlisberger did way too much scrambling around and improvising. Even though this sometimes worked -- a 65-yard touchdown pass to Santonio Holmes off a zany scramble -- you can't count on scrambling as your game plan.
Both Pittsburgh players and coaches seemed careless on offense. Leading 13-7 with a minute remaining in the first half, Pittsburgh had possession at midfield. Rookie Limas Sweed was running alone up the left sideline on a stutter-go and dropped a perfectly thrown touchdown pass. Eventually the Steelers reached second-and-10 on the Baltimore 21 with 16 seconds remaining, out of timeouts, the wind at their backs. Why was Pittsburgh out of timeouts? Because after dropping a perfect touchdown pass on national television, Sweed did a very unconvincing "oh, I am hurt" number; stopping the game for an injury within the final two minutes cost the Steelers a timeout. (In a miracle of modern medicine, Sweed was fine an instant later, and did break up an interception in the second half.) Anyway, in the situation the Steelers were in, you either kick the field goal or throw a shot to the end zone; you don't risk having a player tackled inbounds and the clock running. Instead, Roethlisberger scrambled around and then threw to the middle of the field, where the half expired before Pittsburgh could spike the ball. No matter how good your defense is, you can't casually squander scoring opportunities.
The Pittsburgh defense seemed to tire in the second half, because the Pittsburgh offense couldn't hold the ball. Example: Leading 16-7 at the start of the fourth quarter, Pittsburgh faced third-and-1 on its 37. That cannot be the Pittsburgh Steelers in a shotgun spread on third-and-1 when trying to grind the clock! Incompletion, clock stopped, bad punt, Baltimore scored and suddenly the pressure is on at 16-14. The pass was not a gamble for a deep completion, rather a dinky-dunky 5-yard thing. No matter how good your defense is, you can't casually throw incompletions on third-and-1 in a clock-killing situation.
I beg to differ. Our offense has casually squandered scoring opportunities and called passes on third and short all season. The defense just keeps bailing them out.
Posted by Josh at 11:30 AM

YOU GUYS R NOT HUGE FANS, UR C******S I PERSONALLY THINK HE DOESN't NEED TO BE REPLACED,AND I'M NOT EVEN A STEELERS FAN!