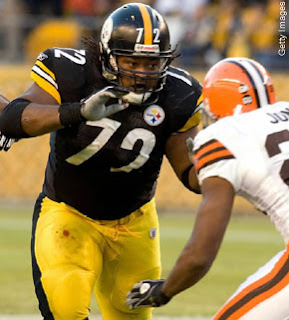 The first major training camp injury goes to Darnell Stapleton. Stapleton has been held out of practice the for the week with swelling in his knee. It's unclear when he suffered the injury and Coach Tomlin would not reveal the extent of it until today. Stapleton's knee is getting scoped and he is out indefinitely.

Guard Darnell Stapleton, who has been bothered by an undisclosed left knee injury, will have arthroscopic surgery Friday morning and will be sidelined for an indefinite period.

Steelers coach Mike Tomlin would not say how long Stapleton, who is also the backup center, will be sidelined, but such procedures are usually two to four weeks.

"We will have more information after [the surgery] is completed," Tomlin said.

Steeler nation expected a training camp battle for the right guard position due to Stapleton's shaky play in the post season, notably the Super Bowl. I expected rookie Kraig Urbik to fight for the position, but, from most accounts, it sounds like Trai Essex was the favorite to overtake Stapleton for the privilege of being pancaked between Willie Colon and Justin Hartwig.

Losing Stapleton hurts the O-line. Even if he lost the starting job, he provides experience as a back up center and guard. All teams hope to escape preseason with few injuries, especially to starters, but if this is the worst injury of the preseason, the team will be in good shape.
Posted by Josh at 6:57 PM