Thoughts from the Crowd 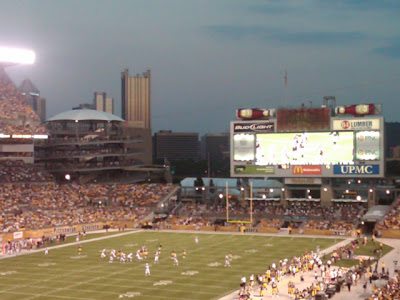 Some tickets to the preseason opener fell into my lap this week and I took the opportunity to take someone who has never been to a Steez game. This was very rewarding to see the excitement of his Steelers "cherry getting popped". He was really taking in everything he possibly could. To me one of the most exciting parts of the night other than my friends excitement was getting to see the family of hardware pictured above. If you multiply the Eagles Super Bowls by infinity it would still be six less than the Steelers. If you add up the Super Bowl titles from Carolina, Houston, Jacksonville, New Orleans, Cleveland, Detroit, Arizona, Minnesota, Cincinnati, Buffalo, San Diego, Atlanta, Tennessee, Philly, Seattle, Tampa, Baltimore, St Louis, Chicago, Kansas City, and the Jets you would get 6. Thats right 21 teams add up to just that of the Steelers.

Being that I was decently intoxicated there's not too much to write about the actual game. Things I went into the game wanting to see were Limas, Mike Wallace, Hood, Mendenhall, and Sepelvuda. I gave a pass to the o-line because they were missing 40% of it.

1) I thought Limas played really well except the drop on the Arizona sideline (may have been Wallace, sorry if I'm mistaken) I am really excited for Limas to be a real contributor to this team.
2) I thought Mike Wallace also looked pretty good. His speed was noticeable and if Dixon would have had some better balls he may have made some explosive plays.
3) I didn't notice Ziggy Hood at all from the crowd. I also did not see 'Tone at all.
4)Mendy had a so so night. I expected more but I saw that he may be alright too. He had a nice run to the outside that I liked how he bounced.
5)It feels really nice not having a handicapped punter. Thank you Danny

Sorry for not the best recap and I will return early next week with a post proclaiming footballs long awaited return to our lives.

PS- I was really preparing myself to tolerate Vick and now that he has signed with the Fags and I can fully hate him like I wanted to. Here's to hoping that the Vick experiment fails miserably and he wrecks the team. I dont think this will happen and Philly could be really tough this year
Posted by Alex at 1:41 PM