Ravens Will Win the AFC North 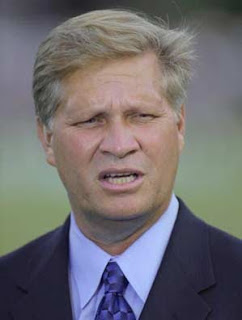 Or so says ESPN analyst Chris Mortensen. Mort is touring the country visiting training camps across the NFL. During his visit to Baltimore, Mort did an interview with the Baltimore Sun in which he weighs in on a long list of questions about the Ravens. Included was this gem:

Where will the Ravens finish?
Mortensen: The Ravens are going to win the AFC North. Then I put them in the pool of four or five teams that can win the Super Bowl. But every time I pick the Super Bowl, I get it wrong. I know this much – two months ago when anybody asked me, I said the Patriots and the Eagles, instinctively. I think the Ravens will be right there with the Patriots, I really do.

It probably doesn't bode well for the Ravens, Patriots, or Eagles that Mort admits that every time he picks the Super Bowl he gets it wrong. But does Mort have a point?

It seems like most analysts are underrating the Ravens even though they made it to the AFC Championship last year with a rookie quarterback. The last team to do that was the Pittsburgh Steelers. The following year the Steelers won the Super Bowl. There is a similarity between those teams, because the Steelers were a team that won with good defense, a good running game, and timely play at the quarterback position. The exact formula the Ravens used last years. Ultimately, I believe Big Ben's play (not to mention a 15-0 record) was more impressive than Flacco's run, but that doesn't mean the Ravens should be taken lightly.

One consideration to take into account is the recent history of the Ravens. They haven't made it to the playoffs in consecutive years since 2000-2001. Unlike the Steelers, Patriots, and Colts, the Ravens have not been consistent contenders. Some may argue that's because of the lack of a star quarterback or the coaching of Brian Billick. I agree with both of these points. The coaching of John Harbaugh and the advancement of Joe Flacco should help the team to build on its success in 2008.

This also isn't like last year when the chic pick to win the AFC North was the Cleveland Browns coming off of their non-playoff 10-6 season. The Ravens are for real.

But, do I believe the Ravens will win the AFC North? In a word, no.

The Steelers will win the AFC North.

It's not that I'm a raging homer (really). It's two things.

One - The Steelers are more talented offensively and defensively. Big Ben is way better than Flacco. Sure, the Ravens have a better running game, but they don't have playmakers on the offensive side of the ball. The Ravens and Steelers defenses were the best in the league last year. But, the Steelers were better. They still are. By a bigger margin.

And don't forget about Coach Tomlin.

Two - The Steelers schedule. The Ravens and Steelers will play the same exact schedule except for two games. The Steelers play the Titans and Dolphins. The Ravens play the Colts and the Patriots. The Titans and Dolphins may have won their respective divisions last season, but who would you rather play? Those two, or the two most successful franchises this decade (outside of Pittsburgh of course). Kerry Collins and Chad Pennington, or Tom Brady and Peyton Manning. That's what I thought.

These two games will provide the margin of victory in the division.

However, let's not forget. After the Steelers 15-1 season in 2004, the team lost the division to the Cincinnati Bengals and barely made the playoffs as the #6 seed. Was it a regular season let down after the highs of 15-1? Sure.

But, it wasn't the regular season title we were after. It was the One for the Thumb.

Baltimore, you can have the AFC North title this year. As long as Pittsburgh is rocking in Seventh Heaven.
Posted by Josh at 8:23 PM