Willie Colon: Bum or All Pro? 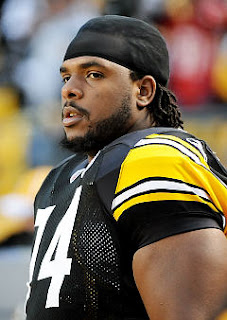 I need to get this off my chest. I have nothing against Willie Colon as a person. In fact, for someone I don't know, I like him more than most. He seems to be a good guy and provides nice quotes to the media. His story is inspiring. He attended a school not well-known for producing NFL stars (Hofstra) and was a long shot to make it far in the league given his status as a 4th round pick. Yet, he's started for two years and won a Super Bowl. So let me say this, "Willie, I'm pulling for you."
Now that that's off my chest, I can get back to ripping on Willie Colon.
Steeler fans repeatedly singled out Colon as a primary reason that the performance of offensive line the last two years was, to put it nicely, sub par. Colon's played so poorly that many have suggested that he is playing out of position and is better suited to play guard. In his last two years starting at right tackle, we witnessed him repeatedly beat by speed rushers, being stacked at the line of scrimmage, commit at least one holding penalty a game, and even receive three penalties for not lining up on the line of scrimmage - a seemingly important detail when you play offensive line.
But early in the 2009 season, the media started cranking out articles about Colon as if he was the next Jackie Slater. The Post Gazette wrote an article claiming that Colon would be more expensive to sign than either of the contracts signed by Max Starks or Chris Kemoeatu. The article also included these eye opening quotes from some of the Steelers coaches:

The coaches not only think Colon, 26, was the team's best offensive lineman last season; they think he is one of the best at his position in the National Football League.

"I think Willie Colon is as good a right tackle as there is in this league," said offensive coordinator Bruce Arians.

"He's as good a run-blocking right tackle as there is in the league," said offensive line coach Larry Zierlein. "He's an excellent drive blocker and his pass protection has improved tremendously. He's a lot better pass blocker than people want to give him credit for."

Excuse me? For being such a great run blocker, why were the Steelers so poor at running the ball last year? As if I needed more reasons to doubt Arians and Zierlein.
But all sarcasm aside, it's unsurprising that coaches have positive comments about their own players. After all, Arians and Zierlein (with Tomlin's approval) are the ones that decided to start Colon over a clearly superior player, Max Starks. By making comments like the ones above, they are protecting their own images and validating their decisions. And we all know Arians is the biggest defender of his offensive line.
However, it's not just the Post Gazette and Steeler coaches raving about Colon. John Harris from the Tribune Review wrote an article today intimating that Colon will be receiving a big payday. National Columnist for CNNSI and former Offensive Lineman Ross Tucker states that, "Colon, in particular, is the typical ornery right tackle, and vastly underrated." Steelers beat writer Jim Wexell got this interesting quote from Steelers rookie defensive lineman Ziggy Hood:

He was an eye opener for me, something I had to go in the film room and watch.
It was rough out there. The first practice was going fine until he came along,
and that really opened me up because he came right at me like a raging bull.
There was nothing I could do about it.

Last year, before playing New England, Bill Belichick had this to say about Colon:

The offensive line is good, the right tackle, [Willie] Colon, is an excellent player. He’s been a real good addition to their offensive line. I think he’s one of the better tackles that we’ve seen this year, especially in the running game."

At the time, I thought Belichick was joking. Maybe he was serious.
Is it possible that Steeler Nation has been so focused on Colon's mistakes from 2007 and the bitterness of watching Colon start over Max Starks that it missed the fact that Colon is a solid player? Or is this a case where the media is sick of discussing the bad offensive line and prefers to institute a contrarian approach in hopes of attracting readers?
It's probably a little of both.
Offensive line play is extremely difficult to judge, because it is rarely featured on replays and so much depends on assignments that are unknown to the common fan. Thus, judging the play of an O-lineman is subjective. Although I've tried to focus more attention on the play of the line, I can hardly describe myself as an expert. I never played football and couldn't diagram the proper technique for a right guard. Mostly I trust what I see. This can be problematic, because if Colon is dominating his man, but Stapleton misses his, I often ignore Colon's great play because the play resulted in a 3 yard loss. In other words, it's easy to miss good plays by O-lineman because they often go unrewarded. Thus, in some ways, I have to trust quotes and assessments, like the ones above, that judge Colon as a solid player.
But in other ways, I watch a lot of football. A LOT of football. And I seek out writers like JJ Cooper that write articles focusing exclusively on the offensive line. That doesn't make me an expert, but I feel pretty knowledgable about the performance of the O-line. I've seen the Steelers surrender nearly 50 sacks a season. I've seen Colon struggle to block defenders. And it's hard to miss penalties when the officials say, "holding #74." So I can't help but be skeptical about the quotes praising Colon.
I'm not the only one doubting his abilities. Judging from Steelers media and blogs, I'm in the majority with my belief that Colon is a below average right tackle. It's also interesting that if the coaches believe Colon is the best offensive lineman, more emphasis wasn't put into signing him to a long term deal.
It's also important to note that Football Outsiders, a website that tracks statistics on offensive line play, named Willie Colon to its All-Keep Chopping Wood team, a sort of anti-pro bowl list, that would indicate they believe Colon is one of the worst, if not, the worst right tackle in football. Despite Colon's purported abilities to run block, the Steelers were dead last in runs to the right. And, depending on who you trust, Colon allowed between 5.5 and 7 sacks last year (a stat that would rank him in the middle of the pack for right tackles). FO wrote this about Colon prior to the Super Bowl:

Right tackle: Willie Colon, PIT
This is likely the first time a lineman on the All-KCW team will play in the Super Bowl, but Colon's appearance is well-justified. The Steelers were dead last in runs to right tackle, 19th to right end. Colon committed 11 penalties and allowed 5.5 sacks.

As we enter the 2009 season, I'm thoroughly confused about Willie Colon. Is he a Pro Bowler or a bum? Will the Steelers dominate rushing to the right side or should they try more runs behind Starks and Kemo? I'm entering the season cautiously optimistic in this area, but I suppose I would just be happy with small improvements.
That said, I reserve the right to restart my "replace Willie Colon" campaign on September 10.
Posted by Josh at 10:51 AM