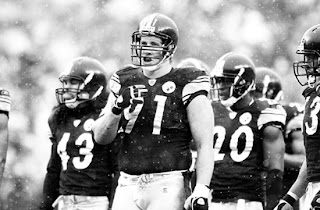 According to the Post Gazette, Aaron Smith may have a significant shoulder injury.

Smith's right shoulder was injured in Detroit Sunday and coach Mike Tomlin said today it "potentially could be significant."

Tomlin said the injury potentially could keep Smith out for awhile, pending the result of tests today.

The Steelers regard Smith as the best 3-4 end in football.

Tomlin said Ziggy Hood, their first-round draft choice, is not yet ready to replace Smith as the starter and they would do so "by committee."

Smith is highly underrated in the NFL, but Steeler fans know how important he is to the defense. As mentioned in the Post Gazette, he may be the best 3-4 end in all of football. When he was lost to injury in 2006, the defense dropped off significantly, especially against the run. More information is needed to determine if this is season ending, but the injury has serious ramifications for the Steelers attempt to repeat as champions.
Crap
UPDATE: Aaron Smith will be out at least 3 months with a torn rotator cuff.
Crap. Crap. Crap.
Posted by Josh at 1:32 PM

Update I just saw it. Out for the Season we are so F'd.