Can we call that one a Four-Star match up? 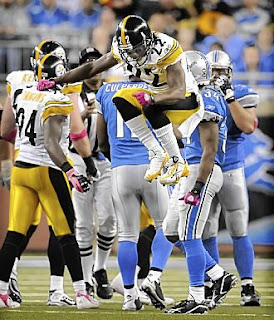 The facts are the facts. Right now, Pittsburgh is a team that is only one score better than the Lions.
The mojo of 2008 is gone. Of course, it's still early in the season. We could get it back when Troy returns from injury. But it's certainly hard to get excited about a 28-20 win against a Detroit team that has won once in the last two seasons. Especially considering that the team was missing its starting quarterback and its only offensive playmaker - Megatron.
Those blessed with a positive temperment will point out that a win by 40 counts as the same as a win by 1. And in the final standings it doesn't matter if the win came against the lowly Lions or the dominant Giants. Which is all true. But when you need a last minute defensive stand to beat such a bad team, doesn't that bode poorly for the rest of the season?
The defense, in partcular, was less than stellar. It employed the bend but don't break method and only allowed 13 points (7 points came from another Big Ben pick 6). I suppose in most cities a defensive performance of 13 points should be extolled, but not in Pittsburgh. And not against Daunte Culpepper and the Calvin Johnson-less Lions. The Steelers defense struggled to get off the field and let up a few too many long drives. All it would have taken to make this game a blowout was a couple three and outs. But the Steelers could not cover Dennis Northcutt and could not get off the field. Allowing the Lions to go 11-18 on 3rd down and win the time of possession battle by 5 minutes certainly needs to be improved upon.
That's not to say that it was all bad. When the team needed it the most, the defense stood up in a big way. After allowing Detroit to drive to the Pittsburgh 21 with 2 minutes to play, the defense recorded 3 straight sacks to effectively end the game. The team finished with 7 sacks led by James Harrison with 3. LaMarr Woodley chipped in with 1.5 sacks; Willie Gay had 1.5; and Lawrence Timmons had 1.
After a 3 and out to start the game, the offense got into a nice rhythm scoring touchdowns on all five of its next five possessions (excluding the drive that ended the first half). Of course, one of those touchdowns was for Detroit. Big Ben had another solid night finishing 23-30 for 277 yards 3 TDs and 1 int. Ben's play has been exemplary all season, but he still needs to do just a little more to avoid the big turnover. I know the 3 touchdowns make up for the one pick 6, but remember he had another interception negated by a questionable roughing the passer penalty.
Nonetheless, the second half offensive effort was less than stellar. Going against a Detroit defense ranked 27th against the pass and 20th against the run, I expected the Steelers to put up at least 35 points. A little too much to ask? Maybe. But I was expecting a big play or two from the defense and special teams.
Much of the reason the offense didn't score often in the second half was lack of possessions. The Steelers defense couldn't get the Lions off the field, so Pittsburgh only had four possessions in the second half. One went for a long touchdown to Mike Wallace. The other three possessions resulted in a total of 11 yards. The poor performance gets pinned on a lack of execution, but it seems unfathomable that Rashard Mendenhall, who again played very well as the starter, only got 5 carries in the second half. Especially considering the Steelers had a two score lead, Mendenhall was averaging 5 yards per carry, and the offensive line was playing more physically than the Lions defense. I'll give Arians a pass because the offense was efficient overall and the Lions are vulnerable against the pass, but the team was just a little too pass happy on Sunday.
Despite all the doom and gloom above, the Steelers are only one game back of the AFC North leading Bengals and are now tied with the Ravens. With the Browns coming to Pittsburgh on Sunday, bringing a starting QB that went 2-17 for 23 yards and an INT against the Bills, the Steelers should be heavy favorites to get to 4-2.
Other quick hitters
Posted by Josh at 12:21 PM

I'm glad we got a win, but I'm still worries about this team's ability to close out games. Our fourth quater points differental is very alarming (about -40, I think) as evidenced by our close (within one score) games. Honestly, I blame this more on the defense. Any time the steez score more than 20, they should win the game.

It's amazing the defense is a bigger concern than the offense. I never thought I would say that after last season. I have confidence the offense can make adjustments (Ben not throwing pick 6's, and Receivers catching passes). I'm not sure the Steez Defense has the mojo to "get it done" even when Troy comes back. Historically the Steelers seem to play according to their competition. I'm hoping that's the deal with Detroit. The play calling has been better the last two weeks, but historically has stunk! Arians (and Whisenhunt) would always run on first down, run often on second down, and pass on third. This is extremely predictible! Arians likes to line up in a two-back set when they want to run. This is too easy to predict, and the extra blocker doesen't help. It's too much of a chess match in the NFL! Arians needs to use a one back set to run, pass, and use play-action with 3 receivers split out most of the time. It's much harder to figure out what an offense is goint to do when they line up that way. Again, I think they did a better job of mixing up plays and formations the last two weeks. I just hope Arians keeps it up because I've never been a big fan of his predictable play calling. The only thing Ken W. did better was calling gimmick plays.