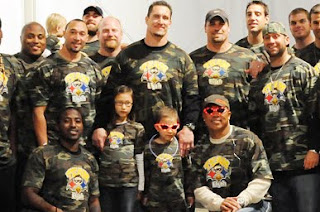 After predicting Steeler victories the last two weeks, I decided to get out of the prognostication business. Check out a different Steezbro's prediction, if you're in to that sort of thing.
Instead, I'm going to direct you to a feel good story posted at Steelers.com about one of my favorite players, Aaron Smith, and his son Elijah who was diagnosed with leukemia last year. Elijah and his family faced tough times, but they are doing much better. To celebrate and fundraise for the Lymphoma and Leukemia Society, the Smith family and a number of Steelers showed up for a fundraising walk.
The story is uplifting and also provides a brief glimpse into the cameraderie shared by the Steeler players.

Smith and his wife Jaimie received news almost a year ago that sent their world spiraling. Their son Elijah, who was five at the time, was diagnosed with leukemia. Tears were shed and prayers were said. There were good days when things were hopeful and bad days when the world seemed dark.

But light has returned to the Smith family. Elijah is now a happy and healthy six-year old with a bright smile and boundless energy. And that was on full display when the Smith family, along with a huge gathering of teammates, family and friends took part in the Light the Night walk for the Leukemia and Lymphoma Society as a part of Team Elijah.

“It’s hard to describe the feeling,” said Smith, a burly defensive end who learned how vulnerable he can be. “To be able to come out as a family and celebrate this with people who are dealing with the same issues and same things it’s unbelievable to me and my family. I can’t say how far we have come in a year. It’s just amazing.”

“...What Aaron had to go through all last year, being a Super Bowl year, having to leave work and go home to this was hard,” said wide receiver Hines Ward, wearing light up glasses for the walk. “We are a close knit group. Elijah has 52 uncles on the team. He is one of ours. When one family is affected and having to go through something like this then we are all affected."