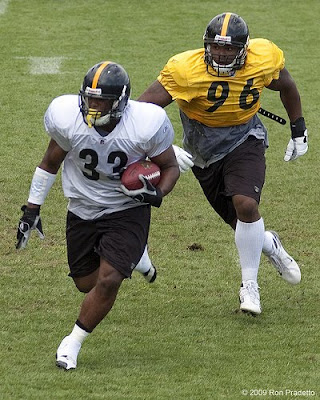 Every year it seems, Steeler fans fall in love with a a player in training camp. This year it was a little known running back from Bowie State named Isaac Redman. The love fest was not without reason, he had a great camp but with so much talent on the roster he was cut during the final roster trimdown. The Steelers luckily kept him on the practice squad. With Willie Parker out this week, Redman has been signed to the 53 man roster and I wouldn't be surprised to see him suit up. To make room for Redman, Nick Eason, a reserve D lineman, has been cut. I would like to see him get some carries to determine if he can actually play against 1st team defenses. However, with our poor run blocking I am not sure if anyone can get a fair shot at showing what they can do.
Posted by Elliot at 4:36 PM