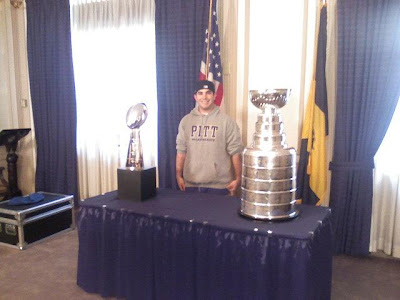 A dream come true came when I ran into an opportunity of a lifetime with this picture. My friend and I unknowingly sneaked into Mayor Ravenstahl's office after the public appearance at the county building downtown and got pictures with the Cup and Lomabardi trophies. We definitely were not supposed to be in the Mayor's office but somehow got in unquestioned. What a spectacle to behold and a way to cheer you up after getting crushed by an exam. Alyonka was also there and was looking mighty fine. 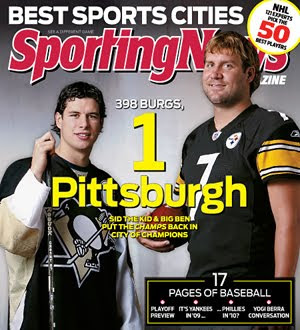 whoda thunk it? Pittsburgh was named by the Sporting News as the best sports city in North America. Was this even a contest? How could it possibly not be after winning both the Stanley Cup and the Super Bowl? Does this picture on the front of the Sporting News ruin the chances of SI recreating the Sportsmen of the Year with Pops and Bradshaw with Sid and Bung? I hope not. I was really hoping SI would do that.


Another dream come true happened on Monday Night Raw, getting to see my favorite thing as a kid and my favorite quarterback teaming up together. What a site to behold seeing Ben and the offensive line hosting Raw on Monday night and teaming up with DX. It looked like they got to have some fun with the Pro Wrestlers. Seeing Ben next to the Big Show made me realize how big Ben actually is. Without pads Ben isnt much smaller than his O-line either. Also it didn't appear that Darnell Stapleton is that injured and looks like he could play. Was putting him on IR just a reason to play Essex?

Are people really serious already crowning Mendenhall the running back of our future and that Willie Parker is finished and that there is now a RB controversy? Less than a week ago people were calling for Tomlin's head because of his "poor" draft classes. I guess people's heads only last a week in the NFL.
Posted by Alex at 5:47 PM