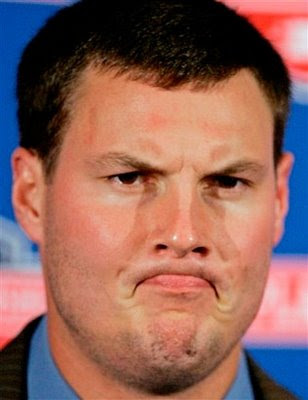 The Chargers are something like 0-13 in Pittsburgh lifetime during the regular season. Will that streak end Sunday Night? I don't think so. The Chargers are pretty banged up defensively and it seems to me like the Steelers should be fairly desperate for a win. Behind the Steel Curtain has a great preview and looks at a lot of numbers. It is definitely worth checking out to see where each team should have advantages.

It is looking more and more like Willie Parker is NOT going to play on Sunday. He sat out practice today and will be a game time decision. This should open the door for Rashard Mendenhall to get a lot of carries. However, he was benched last week for not knowing his assignments. Hopefully, he put in the time this week and we can get a real look at him. Still, expect alot of playing time for Mewelde Moore who I think is our best option right now. One factor that bodes well for the Steelers running game this week is that San Diego's main run stopper, Jamal Williams is out. He has caused tons of problems for the Steez in games past. Also Shawn Merriman is not 100%.

LaDainian Tomlinson should play this week after sitting out the last two. The Steelers normally have shut him down for the most part. I am more worried about screens to Sproles, Rivers throwing to Gates, who would normally be covered by Troy and Rivers going downfield against our secondary are our biggest concerns this week on D. If we don't get pressure on Rivers, we could be in for along evening. Pressure and forcing turnovers are huge.

The offense needs to score touchdowns in the redzone and sustain drives. I think the blocking has improved each week and I look for that to continue. Mike Wallace is locked into the third wide receiver position. I am interested to see if Shaun McDonald gets more playing time this week than Limas Sweed. At least he can catch the ball.

What are your predictions for the game? Leave some predictions in the comments.
Posted by Elliot at 2:21 PM

Prediction: If we don't win, I will officially start wigging. Another prediction: Rivers is a mung.

Good call on the sproles screen, that will kill us. At least one will go for 50+ yards and probably a TD.

Dicky needs to figure out that our secondary can't cover without Troy for more than 4-5 sec and instead of dropping back more people into coverage to compensate for that, we need to bring it so Rivers has about 3-4 sec to make a decision.