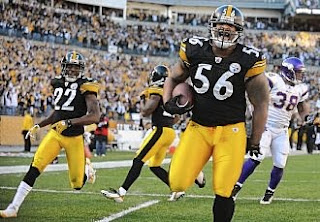 The Steelers like to make it interesting. But for the first time this year, the defense won the game.

On a play by play basis, this was far from the team's best game this year. The offense couldn't get into a rhythm. The defense let up long drives. Minnesota held the ball for 36 minutes to the Steelers 24. That doesn't sound like a winning recipe against one of the best teams in the league.
But, as Mike Tomlin likes to say, the splash plays made all the difference.
The first "splash" play wasn't a turnover. In fact, it was a big play from the Vikings. On 4th and 2, Sidney Rice got behind the defense for a long catch. It looked like it might be a touchdown, but Troy Polamalu caught Rice from behind and tackled him at the 1 yard line. The play seemed meaningless at the time, but after three consecutive plays that resulted in no gain and an ultra-conservative field goal from Brad Childress, Troy's tackle saved 4 points.
The second splash play was made by a player that hasn't been mentioned much this year - Brett Keisel. Keisel beat Steve Hutchinson, one of the best guards in the game, and stripped Favre. After Woodley picked up the ball, we saw an envoy of black and gold surrounding him on his way to the end zone. A marvelous sight that we've seen too few times this year.
The third splash play was more luck than skill. But the Steelers haven't seen many balls bounce their way early in the season. A ball thrown a little hard and high caused Chester Taylor to tip it into the hands of Keyaron Fox.
The Steelers picked a good day to finally win the turnover battle.
After the game, Brad Childress described the Vikings loss as fluky.
Bad etiquette? Perhaps. But Childress was right. The Vikings outplayed the Steelers in nearly every facet of the game.
The Steelers offense was out of sorts all day. Big Ben looked uncomfortable in the pocket. Despite a well played game by the O-line, Ben failed to find open receivers. Whether that was a case of the Vikings great coverage or Ben not accepting the check downs provided to him, who knows. But with Antoine Winfield out of the game, I certainly thought the offense would be more successful than it was. Perhaps the most surprising occurance was the success of the Steelers running game against the stout front of the Vikings. As a team, the Steelers averaged 5.3 yards per carry. Mendenhall averaged 6.9 yards per carry. For the second time in three weeks, it's striking that Mendenhall isn't getting more carries. The easy explanation is that the team is a pass first team. But this week, it may be more of the fact that the offense couldn't sustain drives, so the opportunities just weren't there.
Despite what you may hear and read, the 2008 Steelers defense was not back. The Vikings offense moved the ball easily throughout the last three quarters and racked up 386 yards, a season high let up by the defense. Considering that the defense only allowed 300 yards in a game one time last season, this wasn't a dominating defensive performance. But it was an opportunistic one.
Brett Favre lamented after the game, "There's a lot of 'what ifs' in a game like this. Pittsburgh can probably say the same thing,"
Pittsburgh can definitely say the same thing. Consider the variety of mistakes made by the Steelers:
- Penalty negates a Santonio Holmes touchdown
- Four offsides penalties
- 0-3 in the red zone, including a Mendenhall fumble at the 5 yard line
- A kickoff return touchdown allowed
- Ben Roethlisberger fumble late in the 4th quarter
But that's the beauty of splash plays. The cover the other mistakes.
As Mike Tomlin said after the game, "When you put a couple of splash plays defensively; you put 14 points on the board defensively you can overcome a lot of errors. We were far from a perfect team, but we won today...It’s good to get into a bye winning a few in a row and we’ll continue to improve in our areas of deficiency, kickoff coverage being one of them."
5-2. Bye next week. Sounds good to me.
Posted by Josh at 12:46 PM

I don't care how many yards the Steeler's Defense gave up! They only gave up 10 points. In the end, it's points that matters. I thought it was an excellent defensive performance! You said we gave up too many points against the Lions and were concerned about how we'd play against a good team. I agreed with that. Now the defense gives up 10 points and you say it was far from dominating. I highly disagree!

Ben is an excellent quarterback who knows how to read defenses. The anouncers said at various times nobody was open. The problem is we have average receivers, and Ben (as always) has to "Do more with less". Ben's been in the league for 6 years, and is one of the top 3 quarterbacks in the NFL. I highly question the ability of Santonio "Flex My Muscles" Holmes, Mike Wallace, and Hines Ward (Hines ain't gettin any younger and faster). Wallace is showing promise, but isn't a number one receiver yet. Both of them are covered too often, and Holmes still drops too many balls.

Speaking of disagreeing, your comment about our receivers is ridiculous. Hines came into the game leading the league in receiving yards - you don't think Minnestota knew that and as part of their defensive game plan, tried to shut him down??!! Also, in one play Santonio made a great catch and run on a slant breaking multiple tackles to take the ball inside the 15. He also should have had a TD had it not been for a fluky penalty on Heath. Ben "do more with less" as you put it, has plenty of weapons at his disposal. Yes, the offense had a bad day and I agree with you that Ben is in the top three QB's in the league, but on a day like this you question the playcalling, not the ability of the receivers.

You are correct that in the end, it's points that matter. But, on a consistent basis, the Steelers won't always be bailed out by turnovers. The Vikings had four drives in the second half that reached the red zone and scored a total of 3 points. That won't always be the case. It's hard to allow nearly 400 yards and describe the performance as dominating.

The long drives also kept our offense off the field, which prevented our guys from getting in a rhythm. It's pretty unusual to lose the time of possession battle by 12 minutes and have the opposing team run double the amount of plays and still win.

But like I said, splash plays make all the difference.