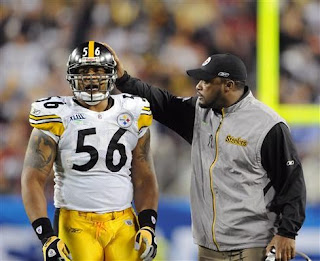 One of the many questions of the early season is where has LaMarr Woodley gone? Our beloved left outside linebacker had 11.5 sacks last year, and teamed with James Harrison for the most sacks in Pittsburgh linebacker history. This year, he has 0 sacks.

Post Game Heroes, a blog that follows the Steelers, is telling fans to calm down, because they found LaMarr Woodley.
But, it turns out LaMarr Woodley isn't hard to find. He's writing a column at SI.com.
In the many musings of Woodley, he claims that quarterbacks are overprotected, the Steelers have a target on their backs, he's excited to return to his home state this week, and he will get off the sack schnide this week.
Here are some of the more interesting comments:

We won the Super Bowl last season, and expectations are high. We know we've got a target on our back. Every team we play acts like we're their biggest game of the year. Whenever we come to town it seems like the stadium is built up that week. I think other teams like to match up with us just to see where they stand. They know we're going to play hard-nosed football, hit hard and run the ball. That means they're going to have to play at 100 percent to beat us.

When Chicago beat us in Week 2, you'd think they'd just won the Super Bowl. And when we went down and lost to Cincinnati, you'd think they just won Super Bowl XLIV. Some teams can handle winning, some can't. We're used to winning, so we know how to handle it. We also know how to handle when we lose, too. It all goes back to the guys we have. We know it's a long season, and we know where we need to be by the end of the year. We'll get there.

...Last year I also had seven games without a sack. Everything goes up and down. I used to get down on myself when I wasn't getting sacks, but it wasn't just about that. It was when I wasn't getting sacks and we were losing. That's when I get mad at myself. Most of the top pass-rushers have their ups and downs. The main thing for a pass-rusher is, how do you bounce back? For me, as long as we're winning, I'm cool.

Like last week against San Diego, it was good for me to get some pressure on the quarterback, but most importantly we won.

I haven't gotten a sack yet this season, but I think I'm going to kick it off back home in Michigan this week.