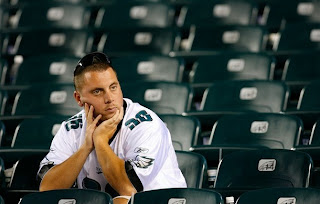 The battle of Pennsylvania, the day Penn State University is divided in half – Eagles vs. Steelers – and this time it ain’t preseason. As an Eagles fan, I normally don’t really care what that AFC team on the left side of the state does. If I didn’t know so many people from Pittsburgh I probably wouldn’t understand the kind of loyal fans there are in the steel city. On the flip side, I’d like to let all you fans from the city of “champions” in on us misunderstood and often villainized fans from Philly.

First of all, you would be pretty pissy too if NONE of your teams had won a championship since ’83. For me and the younger generation there are mostly fairy tales of the Broad Street Bullies, or Dr. J, or Michael Jack Schmidt which mean a lot to me but kind of seem like they are not mine. Since I can remember watching sports I have seen all four franchises get to the big dance – and lose. Seriously, what are the chances of that?? So what some may say is a hostile crowd of front runners who boo their most beloved players I will let you in on a little secret. That is pure passion coming through. We are so used to being let down by injury and chokes, yet we keep coming back and supporting with blind love. Frankly, it’s all we have left. So call a Philly fan a lot of things, but don’t call us bad fans. Or we will beat the shit out of you in the parking lot of the Linc. For real.

Wow, these guys are both off to a great start. Ben had a drop off in week 2 against the Browns, but that bastard Ike didn’t stop with Galveston and continued to devastate the over in the Sunday Night Matchup. Meanwhile, McOneHitAwayFromAnInjury has had two awesome games and looks to be his old self. With a nagging shoulder injury (don’t bother to ask ben about it though) and a legitimate opponent for the first time this year I give the edge to McNabb.

Big Red vs. Mr. T
These are two very interesting coaches. Reid is a proven winner (except for the big games) and Tomlin is a hot new talent in the league. If this was a sumo wrestling match I’d feel real confident with the Reidster. I will fully admit that I don’t know much about Coach Tomlin. What I do know is that he gets pumped on a great play and gets in someone’s face if they screw up – I can only dream of fat bastard doing such things.

Advantage: Tomlin
(Did I Mention I wouldn’t trust this man alone in a room with a woman I cared about for 5 minutes??)

Honestly, I only included this matchup so I could put a gay picture of Jeff Reed on the blog. Seriously, he gets wasted and takes his shirt off at the bar all of the time, google it. What a douchebag.

Both are guaranteed to get you closer to a heart attack. Both taste really good. The drawback of the Pitts-Burger for me is that there is just too much shit going on. Fries and slaw are good but not jammed onto my sando. As a bonus you can get a delicious cheese steak at Pat’s 23 hours a day. I’ll take a wiz wit please. 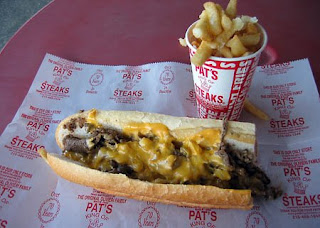 With all of these important factors in mind, here is my game prediction. After a tough road loss to the best team in the league, the birds will be hungry for a win. The Steez will have their hands full in Philly dealing with a potent offense, a speedy defense, and possible D size batteries raining down from the upper levels of Lincoln Financial Field. Predictably, I like the birds in this one.

Good post Higham. It should be a great game. Remember when you begged us to wear a Steez jersey?

I do remember. Gambling and booze will make you do crazy things.