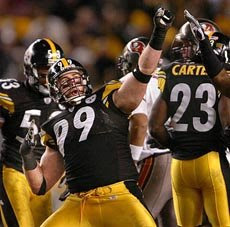 Brett Keisel’s calf injury could be a very devasting injury to the Steelers’ D. Initial reports were he was out for “up to two months” but I’ve seen it could only be one month. But either way it is going to hurt. Travis Kirshke will start in his place and Nick Eason should see some time as well. Nick Eason played well in Week 1 but he’s not the same caliber player as Keisel. If there was one are of our team where depth was an issue and an injury would be devastating it was our D line. Keisel was an integral part of our pass rush, he lead the team in hurries last year I believe. If Keisel returns before he’s completely healthy he could hurt the team as well. Coming off the line one of the most important facets of his game is his explosiveness and his push off the line. If his calf isn’t healed he will lose a significant amount of power and quickness. Keisel is a quietly solid player and the D will surely miss his absence.

Do we miss his absence or is this a cntradiction in terms?