Anything Can Happen in the AFC 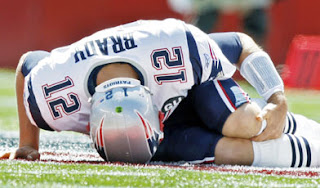 After a wild first week filled with injuries (galore) and upsets, one thing is clear: we are in for one hell of a ride this season. Wherever you went to get your football fix this offseason and preseason, you undoubtedly heard that the Steelers had the toughest schedule in the league. And on paper that sure seemed to be the case. The Steez drew the NFC East (the defending Super Bowl Champs, Philly, Big D and the 'Skins)-possibly the toughest division in football, the AFC South, equally as tough with Indy, Jax, Ten and Houston. To top it off they added San Diego and New England to the mix. Not to mention a division that contains Cleveland, everyone's flavor of the year to win the AFC North. Things sure change in a hurry.


Easily the biggest story of Week 1 was the loss of Tom Brady for the season with a torn ACL. Their backup QB, Matt Cassell, has not started a game since high school. New England has thrived on being able to plug players into the lineup when starters have been lost to injury and not miss a beat. I don't think that is going to be the case here. Some players can't be replaced. Tom Brady is one of those players. It showed in their victory against KC. The loss of Brady makes the Steez schedule easier period.

The Chargers, a popular pick to represent the AFC in the Super Bowl, couldn't hold on to a late lead, allowing Carolina to drive down the field and score a last second touchdown to win the game even without "Swingin" Steve Smith, who was suspended for beating the crap out of his teamate at pratice. To make things worse, SD star linebacker, Shawn "I may be the dumbest man alive" Merriman is playing on what not one, not two, but three doctors have told him is a career threatening knee injury and could go down at any moment. Suddenly, they aren't looking as formidable as once thought. Schedule strengthbeginning to look a little less daunting.

Jacksonville couldn't beat Ten who lost Vince Young to injury. But Ten looked tougher than expected so we will call that a wash for stength of schedule.

Indy looked out of synch. P. Manning playing for the first time after offseason knee surgery. Addai and Dallas Clark got injured. The injury bug or should I say plague is hitting early and often this year and no one seems to be exempt. Their D did not impress me at all. Against the Bears, who have Kyle Orton as their QB mind you, they gave up a big rushing day to rookie Matt Forte. That should not have occurred. we have another Steeler opponent appearing weaker than anticipated. I do think the Colts improve as Peyton gets his reps.

The rest of our division just looked bad. I do expect Cleveland to give us a better game than they gave Dallas next week but Cin was terrible and Balt won ugly.

Needless to say, it is super early but things are looking up, especially the Steelers expectations for this season.

UPDATE: Merriman is done for the year. Apparently steroids could not fix two torn ligaments in his knee and also Post gazette and wpxi are reporting Bungy has a hurt should but is expected to play Sun night against the Shits. He will be limited in practice tomorrow
Posted by Elliot at 11:58 PM

WOW...Is that the new Steel Curtain on the home page?

Quite the maiden voyage commentary. I'm impressed! No wonder you've been published in the Post Gazette...

UPDATE: Merriman is done for the year. Apparently steroids could not fix two torn ligaments in his knee and also Post gazette and wpxi are reporting Bungy has a hurt should but is expected to play Sun night against the Shits. He will be limited in practice tomorrow

El, very helpful to a confused, occasional viewer like myself... especially since I'm actually going to have to fully follow football now that I live with Rich!