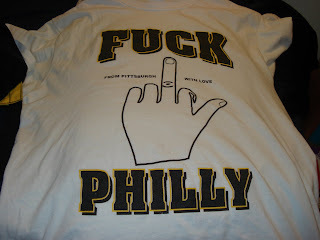 First and foremost FUCK PHILLY. I hate Philly more than I hate anything. Their fans are obnoxious losers whose teams have never won anything but still act like their shit don’t stink. This year is always the year and after week 1 they are already proclaiming to win the Super Bowl when they aren’t even the class of their own division. And when they lose (it always happens) millions of excuses start pouring out of their mouths. Their players are always the best and the coolest when none of them have ever done anything that great. They think they’re the most knowledgeable fans around, which is not even close to being true, and outside of the city of brotherly love (gayest nickname ever) no one gives a shit about the Queergles. When they make the playoffs they’re happy and when Donovan chokes and/or pukes the fans still say, “well we still had a great year.” The only great year you can have is if you WIN. (Eagles = 0) On to the preview.

When the Steez have the ball:

The O definitely could have played better in Believeland but Bung’s separated/sprained/sore shoulder got the job done. He seemed to be in pain throughout the game but at the same time was heaving the ball 60+ yards and was pretty accurate. (Did anyone notice his hicky on PTI yesterday? Maybe that's why he played through the pain) I don’t believe his shoulder should be a real issue this week unless he takes a real good shot, which the Eagles defenders will try to take. The Eagles D loves to blitz and will do so very often. They will get to Bung a couple times and blow up a few runs in the backfield. I repeat they will have a few sacks and TFL’s (Tackle for Losses). It’s how a blitz D works. Do not get discouraged too quickly when this happens. If it’s a chronic problem all day we are in trouble but with the blitzing huge running holes can be created and it leaves secondary players on an island with wideouts and possibly a LB on Heath or Parker. I can only pray that Arians has waited until this week to show what Willie can do as a receiver because he could torch a LB one-on-one. The Eagles secondary has huge name players all through it but they got torched as a unit in Big D. Tony Blomo threw for 300+ and 3 TD’s. was crushing them, something Heazy could do again this week. Look for Ben to elude the pressure and improvise a deep pass to Santonio or Hines. The Eagles D got two lucky turnovers last week both from Blomo’s retardedness. The fumble in the endzone was awful and the pick to Asante Samuel was a terrible throw which Samuel lucked out that he was playing behind the receiver like that and the ball landed in his chest. If we can avoid the costly turnover we should be in good shape.

When the bitches have the ball:

The Eagles O has looked outstanding this year. McFagg is playing as the old McFagg and Westbrook is a beast. The receivers are playing well except for DeSean Jackson being an idiot and not scoring last week. Does he think he’s Plax or what? They don’t have their top receivers in the lineup yet either. The Eagles O is annoying to watch its all little dink throws away from people. It works though. The D line and Silverback and Woody will be a huge factor in the game. The loss of Keisel is going to hurt, bad. The play of the threesome of Kirshke, Roye, and Eason will be crucial. Tackling will be the determining factor of the game. If we don’t miss tackles and get to the ball in flocks we could be in good shape. But if Westbrook and Co. are making people miss we could be in trouble. Also the secondary needs to keep everything in front of them and eliminate the big play. The Steez will be able to get to McNabb for sure, but if they can get him down is another story. He has lost some of his legs but he still can evade a rush and throw the ball downfield. Our D needs to flock to the football.

Our coverage teams have looked better but I’m still not convinced of how good they are yet and it seems their troubles have now moved to the return game. If we can field the ball and tackle we’ll be alright. Skippy looks solid and Berger had a 45.5 yard punting average in the swirlfest in .

This is going to be a tough, good game. The big play and our defense will determine the outcome. The D will break at some point but hopefully it’ll bend way more. The O should get its rhythm back and do work. I look for the Steez to win 24-17.

Do you really think that we can beat Fuckidelphia by 7 ? I dont think the spread will be that great. I look for us to win by 1-3 points if we can get to McNabb and stop Westbrook. O yeah, we need to protect Ben, complete tackles, not fumble on the return....YOI!!!!!!!!

wow, nice educated sounding post. it should be a good game. Fuck you too.

The Eagles offense is all dink throws?? What team are you watching? Unless you consider 20 yard pickups dinks...

You sir are an idiot

I'll take a crap on Pittsburgh

Sounds like someone has some serious philly envy. Its ok, you can come visit our real city sometime. But then you have to go home to shittsburgh.

why in the hell would i be envious of philly? i hate losing and thats all they do?

They didn't lose on Sunday...Go Birds!