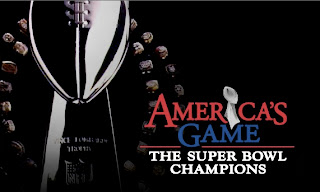 I'm just gonna put this out there. NFL Films is awesome. The series America's Game, which chronicles past Super Bowl Championship seasons with commentary from key players and coaches, is outstanding. And that's why I have my DVR set for the NFL Network Wednesday night at 8 pm. The edition chronicling the 2008 Super Bowl Champion Steelers (WOOOO!!!) will air at that time. I suggest you watch it. You can thank me later.

You're probably wondering why I'm DVRing it instead of watching it. Well, if you must know, I'll be flying back to Pittsburgh on Wednesday night to attend the season opener at Heinz Field. So suck it.
Posted by Josh at 11:21 PM