Lots of good stuff on the interwebs today.

I guess that happens the day before NFL kickoff when your team just won a Super Bowl and opens in front of a nationally televised audience against the team with the best record from the previous season. Who knew?

We'll try to find the best stuff for you to review, but really there is so much I'd just point you to ESPN, CNNSI, the Post Gazette, Yahoo, FoxSports, CBS Sports, and whatever else your little heart desires. There is enough out there to make sure you get no work done before tomorrow night's game.

But my favorite nugget of information out there came from a Post Gazette article on James Harrison. It details the defensive player of the year's intense shyness. 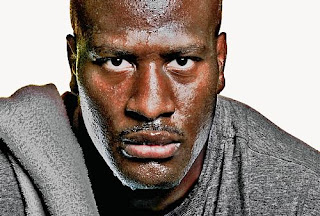 With his brutal honesty and more brutal play, how can you not love Deebo?

"I turned down a whole bunch of stuff," Harrison said. "Go here, do this and do that. I don't want to do nothing. I'm not interested, especially now, I don't really need it.

"I'm happy with the contract I have. And the kind of money I would get from that versus what I'd have to do, I'd probably have to sit there and talk to people." (emphasis mine)

Right on James! If I just signed a contract for $50 million, I wouldn't want to talk to people either.
Posted by Josh at 11:06 AM

He's great. But he's nuts. However; it's the same kind of nuts that greats like Lambert and Ham had. All he wants to do is light people up on the field... and that's exactly what you want out of a Steeler linebacker.

I love how intense he is. I was watching the immaculate interception yesterday and it's funny to see how intense he was after the play. Everyone was trying to hug him and he was having none of it.

The best part about it is that his teammates love him. Sometimes players with this kind of attitude rubs teammates the wrong way. But not Deebo.

It really is amazing how well the defense gets along with the different personalities. You would think that personalities like Deebo, Troy, Big Snack, and others might not get along, but Coach Dad brings them all together.